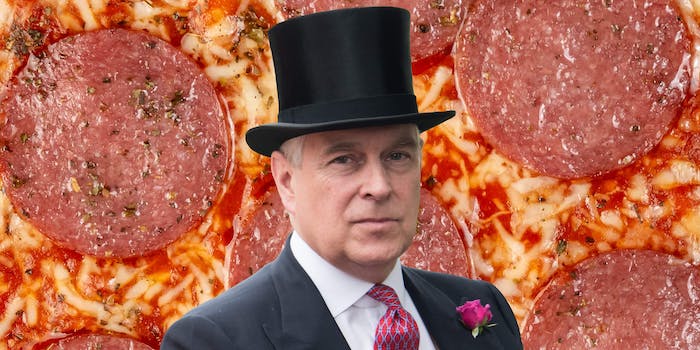 Over the weekend, Prince Andrew gave his first interview since becoming mired in the Jeffrey Epstein child trafficking scandal. But the British royal may want to rethink his defense.

Andrew is one of the more famous people tied to Epstein, who he has admitted was his friend. Andrew has been accused of raping Virginia Giuffre when she was being held by Epstein as a sex slave.

In an interview with BBC News, Andrew said he couldn’t have committed the rape because on the night in question, he was taking his daughter out for pizza.

Prince Andrew has "categorically" denied having any sexual contact with an American woman, who says she was forced to have sex with him aged 17

Whether or not it’s true, the idea that his defense would involve a Pizza Express struck some as ludicrous given that since 2016, pizza places have been at the center of child sex trafficking conspiracy theories.

The conspiracy, known as Pizzagate, went so mainstream that eventually, a man went to Comet Ping Pong with a rifle to investigate. And now a man accused of raping a child from a sex trafficking ring says he was eating pizza instead? Unsurprisingly, the statement stoked the conspiracy theory’s flames.

Impossible! Prince Andrew said he doesn’t party with girls; he only goes to pizza parties. https://t.co/j9bFpAEv0c

It’s the new #Pizzagate #PrinceAndrew : I didn’t have sex with teenager, I was at home after pizza party | Prince Andrew | The Guardian https://t.co/8kHxQtTKm6

One of our bosses here at #PizzaExpressWoking has been asked by the Woking Gazette to do a little piece on serving #PrinceAndrew. Unfortunately he can't remember anything about it… #Pizzagate #WokingLife

Andrew’s interview was widely panned. In addition to the pizza excuse, he said the accuser’s description of him “profusely sweating” didn’t add up because he had a medical condition that prevented him from sweating.

When asked if he disapproved of Epstein’s, Andrew said rather tepidly, “Do I regret the fact that he has quite obviously conducted himself in a manner unbecoming? Yes.”

Meanwhile, thanks to Andrew’s interview, the Pizza Express in Woking, England, is getting some fun treatment—at least compared to what Comet Ping Pong went through.

Look. The reviews of the Pizza Express at Woking are very, very good. pic.twitter.com/2r4IptdAwc