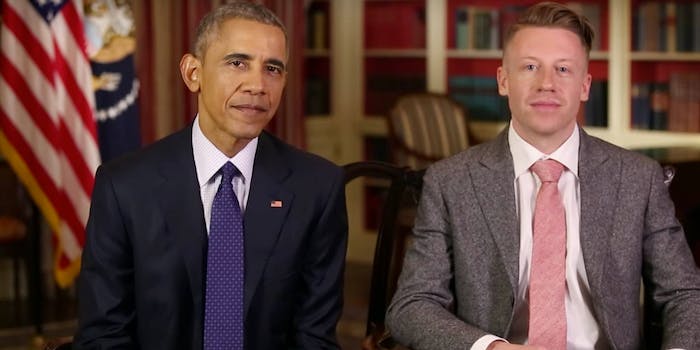 President Obama, Macklemore team up to talk about opioid epidemic

Macklemore usually does his collaborating with Ryan Lewis, but he found another partner in President Obama. The two teamed up during the White House weekly address to discuss the effects of opioid addiction.

In the video, the president and the Seattle-based rapper laid out an alarming picture of the rampant effects of addiction. Deaths from opioid overdoses have tripled since 2000, becoming the leading cause of accidental deaths in the United States.

Many of those cases start with drugs that are prescribed legally. According to the American Society of Addiction Medicine (ASAM), nearly 2 million Americans who suffered from substance use disorder were using prescription pain relievers.

The study also found that four in five heroin users initially started out by misusing prescription painkillers. In a survey of people in treatment for opioid addiction, a shocking 94 percent of respondents said they began using heroin because prescription drugs were “far more expensive and harder to obtain.”

President Obama tapped Macklemore to speak on the topic because of his own personal struggles with addiction. The chart-topping rapper has talked openly about his abuse of prescription drugs as well as his relapse in 2014 after several years of sobriety. Macklemore also lost a friend who overdosed on painkillers at just 21 years old.

“Addiction is like any other disease: It doesn’t discriminate, it doesn’t care what color you are, whether you’re a guy or a girl, rich or poor, whether you live in an inner city, suburb or rural America,” Macklemore said in the address. “This doesn’t just happen to other peoples’ kids or some other neighborhood. It can happen to any of us.”

Honored to be at @WhiteHouse with @MTV to talk to @POTUS about opioid addiction. Really excited for this project. pic.twitter.com/feb7AfoHqn

The video serves as a bit of public relations for the Obama administration, which recently introduced a proposed $1.1 billion investment in resources for fighting prescription opioid and heroin addiction. The funding would expand access to recovery services and equip first responders with overdose-reversal drugs that could save lives. It would also increase training provided to doctors to discuss best practices for prescribing pain medication.

Earlier in the week, Congress approved three bills that would set up federal grants and implement measures to combat drug addiction. The bills received bipartisan support in the House. Lawmakers hope to send a version of the three bills to President Obama to sign before the summer recess in July.

“Addiction isn’t a personal choice or a personal failing and sometimes it takes more than a strong will to get better. It takes a strong community and accessible resources,” Macklemore said.

An extended conversation between Macklemore and the president on the topic of the opioid epidemic is set to air on MTV as part of the rapper’s documentary about addiction.