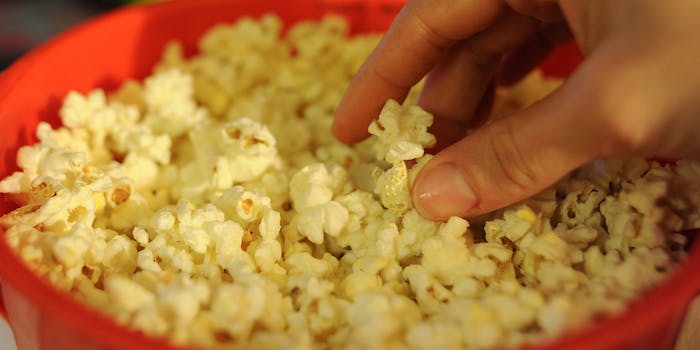 We might as well start a countdown until it gets shut down, but for now, Popcorn Time makes pirating movie simple.

The other night I wanted to watch Mean Girls because it is amazing. But Netflix is a cruel mistress and doesn’t currently have the rights to Tina Fey’s masterpiece. I watched Clueless instead.

If I’d known about Popcorn Time things would’ve been different. Popcorn Time is a torrent-streaming service that’s free to download, easy to use, and probably not legal. It makes Netflix’s media catalog look like a knit top from Forever 21: threadbare as shit.

Here are the movies listed on the “Popular” page: 12 Years a Slave, American Hustle, Frozen, Gravity, Captain Phillips, The Hunger Games: Catching Fire, and a bunch of other blockbusters. My search for Mean Girls on Popcorn Time turned up the real thing, not the straight-to-DVD abomination that is Mean Girls 2 currently taunting Netflix users.

And it’s not just recent popular movies. Searches for classics like Vertigo and Citizen Kane yielded results, although Popcorn Time lost a few points for not having Richard Pryor’s classic vehicle Brewster’s Millions, but as they say, no cutting-edge streaming movie site of dubious legal character’s perfect.

Popcorn Time started as an experiment among friends, but it went so well it’s gaining plenty of fans. One of the creators, who goes by the name Sebastian, didn’t seem too concerned about the legal ramifications of making it exceptionally easy to never go to a movie theater again. “We don’t expect legal issues. We don’t host anything, and none of the developers makes any money. There are no ads, no premium accounts, and no subscription fees or anything like that. It’s an experiment to learn and share,” Sebastian told Torrent Freak.

He’s right—Popcorn Time doesn’t host any of these movies. And maybe it will escape getting fingered by the long arm of the law. But the users beta testing the service (which is available for Linux, OS X 10.7, and Windows 7 and above) may not be as immune. So check it out, but do so realizing you could get in trouble even if the project remains safe.

[Updated: Well, bad news if you wanted to enjoy the illicit appeal of Popcorn Time. The Popcorn Time Installer was pulled from Mega for violating terms of service. It will likely resurface once the developers find a new host.]