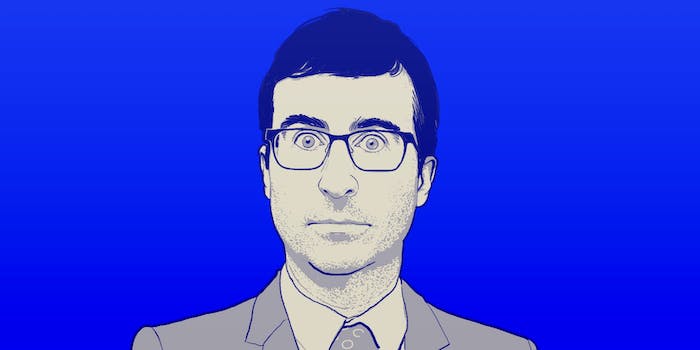 Political humor can be deeply persuasive—but there’s a catch

Last Week Tonight host John Oliver is pretty funny. You could also argue that he’s pretty persuasive on certain issues, given how he uses humor to highlight the ridiculousness of various situations. And scientists have now tested just how persuasive he is—and what, if anything, can interfere with his techniques.

Researchers at the University of Missouri showed clips from Oliver’s late-night talk show to college students to gauge the persuasiveness of his arguments. They then showed the same clips to another group of students, but below the clips were a series of Facebook comments disputing Oliver’s main thesis. The scientists used statistical measures to gauge how much people agreed with Oliver after watching versions of the videos with and without the comments.

The researchers chose their two Last Week Tonight clips based on “salience,” or how invested they thought students would be in the clips’ subject matter. For the low-salience category, they showed students a clip about payday lenders.

And for the high-salience category, they showed them Oliver’s commentary on the shooting of Michael Brown in Ferguson, Missouri.

In a separate, earlier test, the researchers determined that students at the University of Missouri would indeed have stronger opinions about the events in Ferguson than about payday lenders. They predicted that the students would be more easily swayed by Oliver’s arguments about the immoral practices of payday lenders, because they didn’t already have strong opinions about that issue. Ferguson, they reasoned, would be a tougher subject on which to sway viewers, because they had already formed strongly held beliefs about the subject.

What they found was interesting: Oliver was pretty persuasive overall, but much more so on the subject of payday lending than on Ferguson. But students did find Oliver’s arguments less convincing when they saw people arguing against him in the video’s comments.

“A humorous political video posted on Facebook can persuade us, and Facebook comments can reduce that persuasive effect,” Molly Greenwood, a PhD candidate and the study’s lead author, told the Daily Dot in an email.

The researchers published their results in the journal Computers in Human Behavior.

Greenwood attributed part of Oliver’s persuasiveness to the way he injected humor into politics.

“I think that political humor has a unique way of disarming us,” she said. According to her research, we may be less likely to scrutinize someone’s argument if it also makes us laugh. “It’s harder to argue with the jokes.”

The study had some limitations. The authors wrote that the sample of preconceived opinions on Ferguson weren’t as controversial as they expected. That made it harder to tell whether or not Oliver’s arguments were truly persuasive. In addition, the replicated Facebook comments all came from strangers, rather than people the students at least knew by name. This could reduce the social pressures that people feel to agree with what their acquaintances say, making it harder for the researchers to tell if the Facebook comments were persuasive.

Many studies show that we construct social-media bubbles in which we filter out or disregard any information that clashes with our beliefs. This new study suggests that people might not be as confined to their echo chambers as we tend to assume.