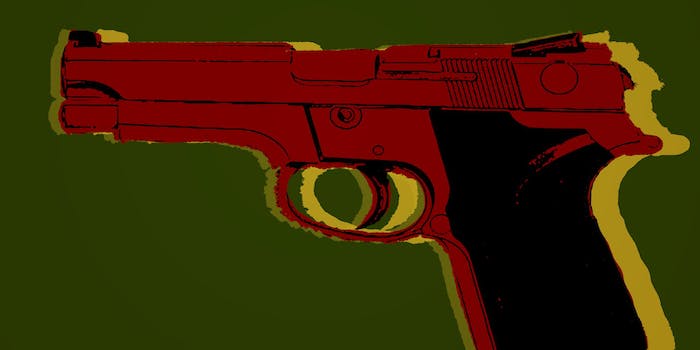 An officer-involved shooting in San Francisco was filmed by a witness and posted on Instagram. The shooting reportedly occurred on Wednesday in San Francisco’s Bayview District around 5pm PT.

A man was killed in the shooting, SFPD Chief Greg Suhr told reporters at a press conference. The footage filmed by a witness shows the man ringed by officers. He attempts to walk down the sidewalk when a round of shots is fired. (Warning: The video is graphic.)

Police were looking for a suspect in a nearby stabbing when they found the man holding a large kitchen knife, the San Francisco Chronicle reports. Several officers surrounded the man—at least seven are visible in the Instagram video—and ordered him at gunpoint to drop the knife, police told the Chronicle.

The man was shot with beanbag rounds and fell but then stood back up, still holding the knife, according to police. Chief Suhr said that, when the man approached an officer, five officers opened fire. The man, who has yet to be identified, died on the scene.

SFPD confirm man with knife shot and killed by police in SF. Chief Suhr said they have witness video but could not confirm Instagram post

“It looks like an execution,” a San Francisco resident who viewed the footage, told the San Francisco Police Commission during a discussion of body-worn cameras for police this evening. “This is why we need the cameras and the video.”

San Francisco Public Defender Jeff Adachi echoed a similar sentiment: “Based on that snippet of video, it does seem that that person was not posing a direct threat and certainly didn’t have to be shot,” he told the Daily Dot. “I certainly would want to know more about why this individual posed a risk that the officer felt that he or others were in danger of being killed. “

He continued, speaking about his gut reaction: “I’m like, ‘Oh no, not another one.’ I think what San Franciscans want to see, especially when you’re using deadly force, is that it’s a last resort. “