There’s still a stigma attached to getting tested for sexually transmitted diseases (STDs), and what’s worse, it can sometimes be difficult for people in rural areas to go to the doctor to get tested at all. Planned Parenthood wants to combat both of those phenomena with a new app called Planned Parenthood Direct.

Planned Parenthood is testing the app in California as a way to help people who may be uncomfortable or incapable of visiting a doctor’s office to get tested for chlamydia and gonorrhea, the two most common STDs. The app, available on iOS and Android, lets people order in-home STD-testing kits that are delivered in unmarked packages to protect privacy.

The application then walks people through the testing process and instructs them to mail a urine sample back to Planned Parenthood clinicians for testing. 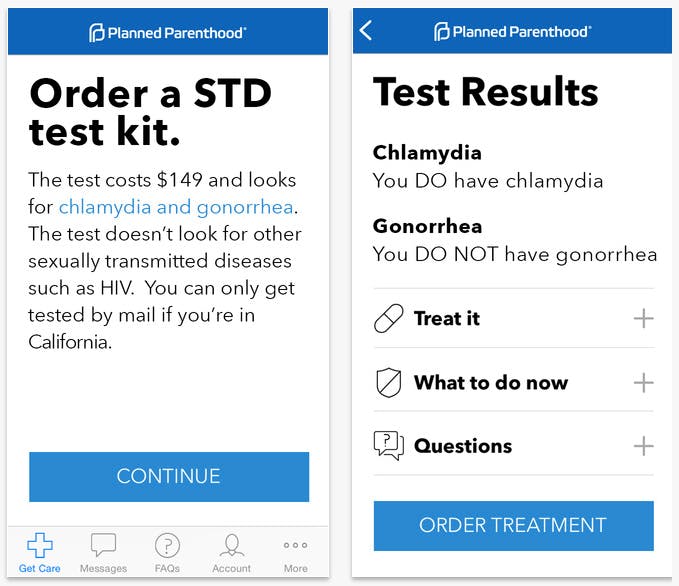 The new app complements an existing effort called Planned Parenthood Care, an app that lets patients in Minnesota and Washington video-chat with clinicians and get birth control and STD testing delivered to their door.

Users of Planned Parenthood Direct will get their results directly in the app, as the name implies, along with instructions for how to treat an STD if they’ve been infected. Planned Parenthood will even send a perscription directly to the nearest pharmacy, although if someone has gonorrhea, the app will recommend visiting a doctor in-person to receive a shot.

If patients want more information, they can chat with Planned Parenthood doctors through the app.

The entire process costs $149, not including the cost of the prescription. That price may still be cost-prohibitive for some people, so an in-person visit might still be the better option, as many clinics provide free or low-cost STD testing for low-income individuals.

Planned Parenthood told Mashable that, if successful, the app will be rolled out to the rest of the United States.