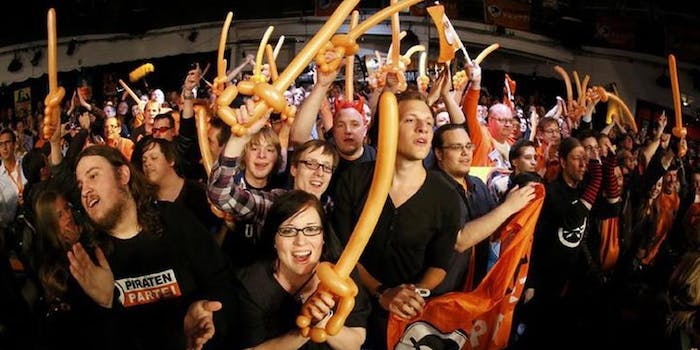 As the Pirate Party gains power, it's also building a platform.

The German Pirate Party continued its remarkable string of election victories Sunday. It also seems to have finally found a non-Internet-related issue to take a hard stance on: the Holocaust.

For the fourth consecutive election in 2012, the Pirate Party has gained seats in a German state legislature: this time in North Rhine-Westphalia, the largest state by population in the country. On Sunday, the Pirates won 7.8% of the vote—gaining 20 seats (out of 237 total) in a state where they previously had none.

The party has an uncompromising stance on issues like Internet rights, copyright reform, and government transparency. Otherwise, it’s much less unified.

Recently, though, the party has had to handle hints of anti-semitism in its ranks: one member angling for a seat on the party’s national board of directors called for a lift on Germany’s ban on denying the Holocaust. Another pirate hopeful spoke out against “world Jewry” at a national party convention in April, prompting boos and walkouts from other party members.

Torge Schmidt, a prominent pirate who was a top candidate for a seat in North Rhine-Westphalia, recently met with an Israeli diplomat to quell any notions that the party harbored anti-semites, calling the Holocaust “horrible” and saying its denial “violates the principles of our party.”

Earlier in May, the party added a terse condemnation of Holocaust denial to their wiki, declared it official, and blocked any changes to the page.

Perhaps now that they have all these new elected officials, the German Pirates will add a few more official policies.