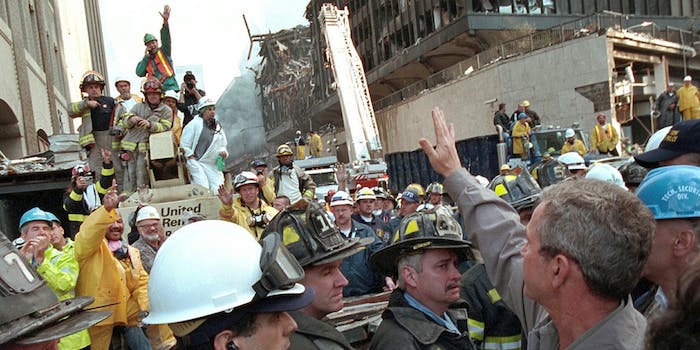 Sixteen years ago, the United States suffered the worst terrorist attack in its history.

Terrorists hijacked four planes, nearly 3,000 people were killed—and countless lives, and America as a whole, were changed forever on Sept. 11, 2001.

An unfathomable spectrum of life has changed since then, but the National Archives has collections of photos that can forever remind us of the immediate hours, weeks, and months following the tragedy that is summed up in a single inescapable phrase: #NeverForget.

Here is a look at what America was like in the aftermath of 9/11, through the lens of the National Archives, when George W. Bush was president . (Captions are from the U.S. National Archives.)

3) After departing Offutt Air Force Base in Nebraska for Washington, D.C. Tuesday, Sept. 11, 2001, President George W. Bush talks on the phone with Vice President Dick Cheney from Air Force One.

4) Vice President Dick Cheney, Chief of Staff Andy Card and Karen Hughes, Counselor to the President, tend to business Wednesday, Sept. 12, 2001, in the Outer Oval of the White House.

5) President George W. Bush delivers remarks in front of the damaged Pentagon Wednesday, Sept. 12, 2001, in Arlington, Va. The President is accompanied by Karen Hughes, Counselor to the President, and Secretary of Defense Donald Rumsfeld.

13) President George W. Bush pets Spot while looking out the window from his desk in the Oval Office of the White House.

15) President George W. Bush shakes hands with Yankee shortstop Derek Jeter Tuesday, Oct. 30, 2001, prior to throwing out the ceremonial first pitch in Game Three of the World Series between the Arizona Diamondbacks and the New York Yankees at Yankee Stadium in New York City.