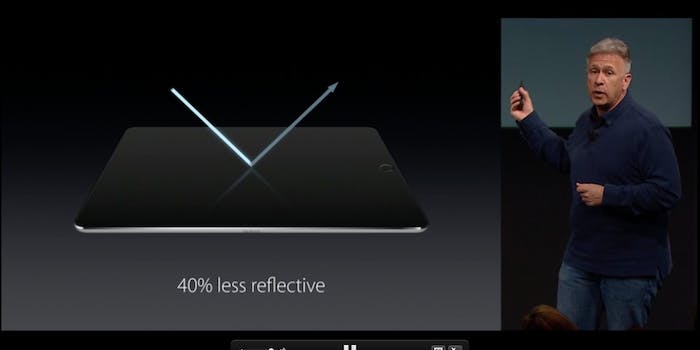 Apple announced a handful of new products and updated apps at an event on Monday, including the smaller iPhone SE and CareKit, a framework for creating apps that enable people to take an active and collaborative role in monitoring their health.

The company also announced a new iPad Pro, the PC replacement from Apple with a 9.7-inch display that’s smaller than the iPad Pro released last year, and something that was said during that particular presentation has rubbed many people the wrong way.

Phil Schiller, Apple’s Senior Vice President of Worldwide Marketing, took the stage in Cupertino, California, to explain some of the new features and specs on the new iPad Pro. Between showing off a new display and camera, Schiller also took some digs at Windows and PC users, specifically calling out those users who are on computers more than five years old.

Schiller said that 600 million people are using PCs that are over five years old. “This is really sad,” he said.

The audience in Cupertino laughed and applauded, but many of those watching the livestream did not.

Dear Phil Schiller, I'm sorry I made you sad, but somedays I have to decide between school, food, sometimes med over an iPad. Sorry. #pc

TFW #AppleEvent jokes about using old vs. new tech & even the affluent privileged are aware of how fucked up it is b/c they're priced out.

who is it sad for if people have PC's that are old if they still serve their needs? the answer is: corporations who want to sell you stuff

"600mil people with a 5 y.o. PC. That's just sad. They should get an iPad Pro."
Oh, because they have an older PC for the specs. #AppleEvent

Schiller may have been attempting a subtle dig at competitors while trying to show that the new iPad Pro is the ultimate PC replacement, but the remark only underscored the privilege and lack of self-awareness plaguing tech executives and individuals in the industry who can afford to buy the hot new gadgets whenever they come on the market.

The “sad” comment stood in stark contrast to Apple’s announcement at the beginning of the program. Lisa Jackson, Vice President of Environment, Policy and Social Initiatives at Apple, took the stage early to tout the company’s recycling efforts; phones, computers, tablets and products Apple makes are meant to last for a long time, and when they reach the end of life, should be recycled.

Five years might be a long time for Apple, a company that releases new devices all the time, but for many people, a five-year-old device can still serve their needs. In fact, older, cheaper computers can be a lifeline to the Internet for individuals who can’t afford to pay for new mobile devices and laptops.

Apple’s MacBooks start at $1,299. The new iPad Pro starts at $599. You can buy older laptops with decent specs from resellers and on sites like eBay for less than $200. You can even buy a new Chromebook for $149.

Sixteen percent of American adults don’t have a smartphone, tablet, or laptop computer, according to Pew Research, and 19 percent of people who don’t use the Internet cite the cost of purchasing and maintaining a computer as the main barrier to using it.

It’s not sad that people still use five-year-old PCs. It’s sad that companies and people in the tech industry think those users should be the butt of a bad joke.