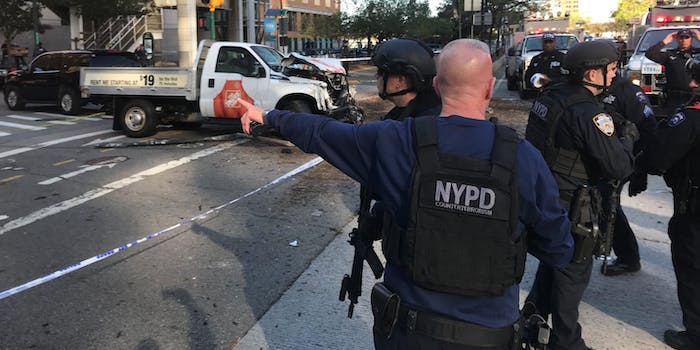 There is no 'active threat,' according to the mayor's office.

At least eight people are dead and more than a dozen others injured in a possible terrorist attack in lower Manhattan on Tuesday, according to New York City officials. One person was taken into custody.

The violent incident took place on west side of Manhattan, concluding near Chambers St. and West St. The New York City Police Department issued an advisory on Tuesday afternoon telling people of street closures and to “expect many emergency personnel in the area.”

Law enforcement is treating the incident as a possible terrorist attack, according to multiple reports, but authorities have not made any conclusions about the nature of the incident.

The NYPD confirmed one person was in custody. The suspect, a 29-year-old male, is alive. No other information about the suspect has been publicly confirmed. Police have so far refused to release the suspect’s identity. According to NBC 4, the suspect is an Uzbek national in the United States on a green card since 2010. Multiple reports indicate that the suspect yelled “Allahu Akbar,” or “God is great,” before police shot and apprehended him.

A spokesperson for the NYPD said they were responding to reports of “shots fired” in lower Manhattan. According to law enforcement, police found a pellet gun and a paintball gun but no full-powered firearms.

The vehicle involved in the incident was reportedly a Home Depot rental pickup truck. The driver sped down a bike path, according to the Associated Press.

According to the NYPD, a vehicle entered the West Street pedestrian and bike path a few blocks north of Chambers Street before striking “multiple people” on the path. “Several” fatalities occurred as a result of the incident and “numerous” people were injured, according to the NYPD.

The vehicle then continued south and struck another vehicle—which the New York Times reports was a school bus—before a suspect displayed “imitation firearms” and was shot by police. Police confirmed the vehicle struck a school bus, injuring two adults and two children.

New York City Mayor Bill de Blasio was “briefed” on the incident and there is no “active threat” according to the mayor’s press secretary.

At a press conference on early Tuesday evening, de Blasio called the incident “a particularly cowardly act of terror.”

“This action was intended to break our spirit,” de Blasio said. “We have been tested before as a city. … New Yorkers do not give in in the face of these kinds of actions.”

“The truth is, New York is an international symbol of freedom and democracy … that also makes us a target for those people opposing those concepts,” New York Gov. Andrew Cuomo said during the press conference.

Cuomo said there would be an increased police presence in NYC but that it does not indicate additional terrorist threats. “To New Yorkers, be New Yorkers, live your life,” Cuomo added.

In NYC, looks like another attack by a very sick and deranged person. Law enforcement is following this closely. NOT IN THE U.S.A.!

Update 4:34pm ET, Oct. 31: Multiple reports indicate that as many as six people were killed in the attack. The incident is now being treated as a possible terrorist attack.

Update 5:26pm ET, Oct. 31: At least eight people are dead and more than a dozen injured, according to Mayor de Blasio.