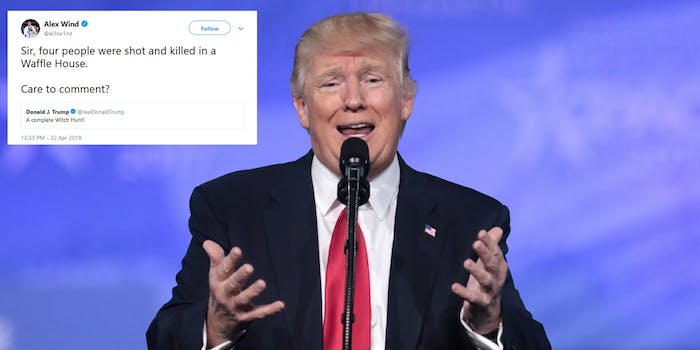 Survivors of the school shooting in Parkland, Florida earlier this year are criticizing President Donald Trump for not speaking publicly about the shooting at a Waffle House in Tennessee on Sunday morning.

Authorities are still searching for the suspected shooter, Travis Reinking, who allegedly killed four people, all of whom were people of color.

In the wake of the shooting—where the gunman reportedly used an AR-15 rifle, the same gun used in the Parkland shooting—several students from Marjory Stoneman Douglas High School have called on the president to comment on it.

Since the shooting happened on Sunday, the president has tweeted about North Korea, James Comey’s memos, Mike Pompeo, sanctuary cities, and Mexico.

“Sir, four people were shot and killed in a Waffle House. Care to comment?” survivor Alex Wind tweeted on Sunday.

Sir, four people were shot and killed in a Waffle House.

Other survivors did not directly address Trump, but commented on Sunday’s attack.

“This is why this conversation isn’t just about school safety. This is why adding security measures to our schools is only a baby step in curing the epidemic of gun violence in our country,” survivor Cameron Kasky wrote on Sunday.

This is why this conversation isn’t just about school safety. This is why adding security measures to our schools is only a baby step in curing the epidemic of gun violence in our country. https://t.co/stLD2SLGFh

Emma Gonzalez, whose powerful speech at the March For Our Lives rally quickly went viral, also commented on the Waffle House shooting, saying that shootings “don’t just happen in schools, they happen everywhere in America.”

(1/4) He was white and he used an AR-15. The @NRA is about to say this man had mental health issues, so that the rest of us will get scared of anyone with poor mental health and buy a gun in preemptive defense so that gun sales increase. Shootings don’t just happen in schools, https://t.co/FIzyTCvuA1

(2/4) they happen everywhere in America, and now one has happened in Waffle House. You can donate all the shooting shelters to schools that you want, but at the end of the day, we can’t build our world out of Kevlar – someone is making Mad Money off that.

(3/4) The local police say a man at the scene wrestled his gun away – looks like you don’t need to arm a teacher (or a resource officer) to stop a shooting. There goes the sales pitch for @SmithWessonCorp 🤷‍♀️

(4/4) Removing the assault and semi-automatic weapons from our Civilian society, instituting thorough background checks and mandatory waiting periods (and raising the buying age and banning the production of high-capacity magazines) are the ways to stop shootings in America.

As of Monday morning, Trump has yet to make a public statement about the shooting in Tennessee. The suspected shooter was reportedly arrested by the Secret Service in 2017 for being in a restricted area near the White House.

Trump tweeted about a fire in Trump Tower earlier this month shortly after reports came out about it.

“The president offers his condolences to the victims and their families. He is monitoring the ongoing situation and the White House is in regular contact with state and local officials.”