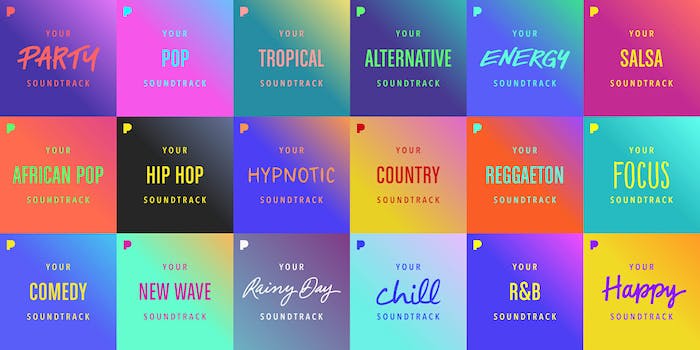 These 'personal soundtracks' aim to capture your moods and moments during the day.

In the streaming music space, early pioneer Pandora often gets left out of the conversation. Pandora is largely known for its not-on-demand streaming radio services: By entering the name of a song or artist, the service curates a station of similar-sounding music titles. In recent years, however, Pandora’s paid offerings have brought it more in line with the likes Spotify and Apple Music. Now, Pandora gets even closer to those competitors with the addition of a personal playlist feature called Personal Soundtracks.

Personalized Soundtracks is a new addition to Pandora’s on-demand Premium subscribers. Each week, the app will curate up four 25-song playlists that it’s built based on your listening trends. If you have a tendency to listen to vocal-less instrumentals, the app may give you a “Focus” soundtrack. Conversely, if you listen to upbeat, high-energy hits, you may get a “Your Energy” soundtrack.

All in all, there are roughly 60 different Personal Soundtracks listeners may encounter, but Pandora plans to introduce additional themed playlists listeners will be able to unlock over the next few months. The app uses a blend of Pandora’s Music Genome, an in-house curation team, and machine-learning models to populate songs in these playlists.

Pandora says the maximum number of playlists it creates each week is determined by a user’s listening habits. Thus, someone who listens to a wide variety of music genres may continue getting new playlists for week after week, while someone who has a more narrow musical listening range. This creation process will continue until Pandora maxes out a user’s playlist categories. Regardless of how many personalized playlists Pandora serves up for you personally, you’ll see its offerings updated on a weekly basis.

If you like some of the new songs it serves up, you can save them to your collection or any playlists you’ve previously created in the app.

Pandora also made an interesting choice with regards to sharing these playlists. If you share one of your personal soundtracks with a friend—who doesn’t pay for Pandora—by sending them a link, they’ll still be able to listen to that playlist. This is a smart move for potentially enticing new listeners to pay for the app’s services.

To check out your new personalized playlists yourself, head to the “Browse” section of the app and then head to the “Featured Playlists” section.