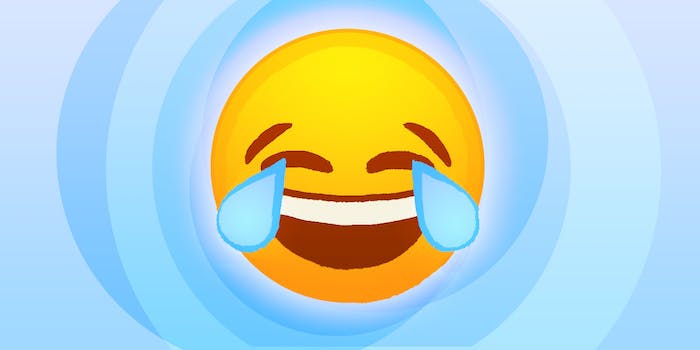 Can you guess which emoji is Oxford Dictionaries’ word of the year?

Nope, it's not the taco emoji.

Apparently, if a picture is worth a thousand words, then a single emoji is more than enough to be this year’s word of the year.

Oxford Dictionaries, in partnership with SwiftKey, recently announced that the single term that bested all the million others available in the English language this year is the “face with tears of joy” emoji.

A selection committee for the Oxford Dictionaries annually reviews candidates for words that best reflects the past year in a nutshell, and rather than settle on a traditional word, it has opted for a pictograph as an homage to the rising popularity of emoji as a language in itself.

The crying-laughing smiley was chosen after analyzing over a billion emoticons, the same methodology Swiftkey—a company that creates keyboard apps for mobile devices—used previously to determine the most popular emoji in every U.S. state.

“You can see how traditional alphabet scripts have been struggling to meet the rapid-fire, visually focused demands of 21st Century communication.  It’s not surprising that a pictographic script like emoji has stepped in to fill those gaps,” Casper Grathwohl, President of Oxford Dictionaries, stated in a press release. “It’s flexible, immediate, and infuses tone beautifully. As a result, emoji are becoming an increasingly rich form of communication, one that transcends linguistic borders.”

Based on Swiftkey’s data, the winning emoji was the most heavily used emoticon in 2015, with over 17 percent dominance in the U.S. Among the words and phrases the “face with tears of joy” emoji beat for the top spot include “ad blocker,” “Dark Web,” “on fleek,” and “lumbersexual.”

These, my friends, are words that have been deemed adequate enough to summarize the year 2015. Remember them well.