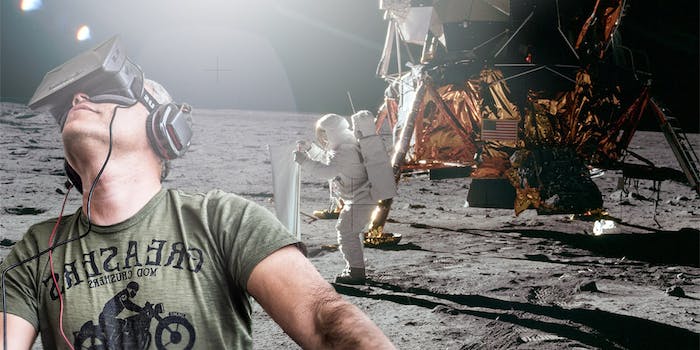 Explore the Moon with Oculus Rift

A group of Pennsylvania scientists have developed an out-of-this-world use for the Oculus Rift virtual reality headset—controlling lunar rovers, allowing anyone to explore the Moon in real-time.

(There’ll be no more puns, I promise.)

The BBC reports that Carnegie Mellon University researchers are competing for a $30 million prize fund offered by Google to anyone who can send video footage back from the moon. Working with Astrobotic—a space firm affiliated with the University—the team is putting together a rover with dual-mounted cameras that will be controlled by the motion-sensitive Oculus Rift headset back on Earth.

The team are working with Elon Musk’s SpaceX to launch the rover when it’s ready, with a planned launch date of 2015.  In addition to the Carnegie Mellon effort, there are 17 other teams all competing to be the first to send video back from the moon and scoop themselves the multi-million dollar prize fund.

Long-term, the Carnegie Mellon team hopes to have “hundreds of robots on the Moon” reports the BBC, and that it could act as a learning aid in schools. It could “[allow] kids to experience what, to this date, has only been experienced by 12 human beings.”