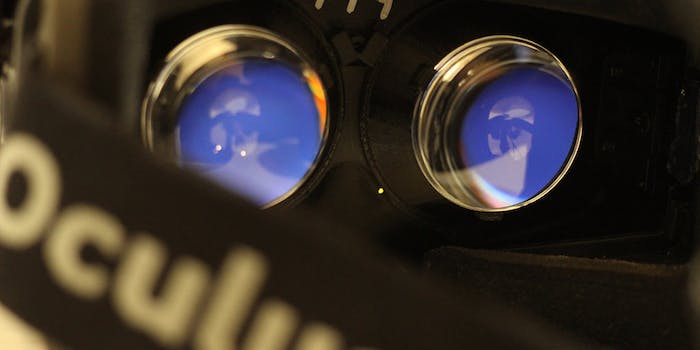 How does HoloLens compare to the Oculus Rift?

Let's get our headsets straight.

Navigating the world of wearable head gadgets was already complicated enough before this week started, but now that Microsoft has unveiled its super-secret HoloLens project there’s a whole new layer of futuristic tech to consider. Google Glass, the Oculus Rift, and the HoloLens might seem like they’re all cut from the same cloth, but there are important differences you need to understand before you can decide which one, if any, you should actually care about.

It’s Google’s attempt to turn a smartphone into something you wear on your face instead of carry in your pocket. It’s worn like a pair of glasses, and a single optical prism is situated in front of the user’s eye. This prism can display everything from navigation information to Web search results, and the unit has a touchpad and a camera built in.

Glass was announced with a lot of fanfare and a lot of unknowns, and its widest release came courtesy of an “explorer” program that was both invite-only and still required you to drop well over $1,000 for the device itself. Prohibitively expensive, clunky, and not terribly fashionable, it was more of a conceptual product than anything else, but it’s still a monumental achievement.

Glass was the first real attempt to create a consumer-level product that brought augmented reality to the masses. Sure, Google ended up cancelling the Glass explorer program at the start of 2015 and we really have no idea where it’ll go from here, but it has helped push wearable tech forward even without being available at your local electronics shop.

It’s still a device that is beloved by many and tech events the world over are still dotted with early adopters refusing to let the “glasshole” stigma scare them away from wearing Google’s fancy gadget wherever they please.

It’s by far the least intrusive of the three head-worn devices we’re comparing here, and you can carry on a conversation with a person wearing Glass just as you would normally. Sure, they might be secretly watching a YouTube video on that tiny display but at least it’ll look like they’re paying attention.

Why you shouldn’t actually care

It might be the least intrusive of all these futuristic headsets, but it’s still funny to see someone wearing one. In short, it’s ugly and you won’t actually want to wear it, but you do because you’re desperate to show the world that you’re ahead of the curve. It has a stigma as a gadget owned and worn solely by smug tech uber-nerds, and while that might not be universally true, it’s pretty close.

On top of that, it’s not actually a terribly useful device anyway. The battery life downright sucks, the camera is unimpressive to say the least, and there’s not exactly a booming selection of apps available. It’s not just a first-run, alpha-level device, but it’s about as powerful as your smartphone was five years ago.

People are always buying and selling these on eBay and Craigslist, so you could buy one right now if you really wanted to. That said, there’s not much reason to now that Google has thrown in the towel and thereby admitted that it’s simply not ready for the public at large. Before long it’ll be cool in a quirky, ironic way, but Google’s next attempt at wearable augmented reality—whenever it comes—is going to have a much better chance at landing on your face.

It’s the virtual reality headset of your dreams. It beganas a Kickstarter project and before anyone could realize if the company was serious it had raised a ridiculous amount of money, Oculus pushed out a pair of early developer versions of its VR headset, and then got swallowed up by Facebook. We’re now approaching an inevitable retail release for the device, though a date isn’t set.

The headset itself is designed to completely transport you into whatever world you desire, and most of the time it’s used for gaming. There’s no augmented reality or real-world features here, it’s all about completely altering what you see, hear, and control so that you can become completely immersed in the game or other VR experience at hand.

The two versions of the headset that are currently available for developers are not as capable as the final retail version will be, but they’re already quite impressive. Things like screen resolution, refresh rate, and features to control motion sickness are still being improved upon and the company has promised to launch its consumer version once it’s hammered out all the kinks. With Facebook now bankrolling their efforts, they have plenty of time and money to make it as perfect as possible.

Note: This section is specifically about the Oculus Rift, but you can substitute Google Cardboard, Samsung Gear VR, or any other true virtual reality headset in and the gist of this remains true: It’s a completely isolated experience.

Because it’s virtual reality fully realized for the first time. You turn your head, and you see a different part of the virtual world, you crouch and your in-game character crouches. It’s impossible to explain the feeling of having your eyes and ears completely transported into a different world without slapping a VR headset on your skull, so I suggest you seek it out for yourself (Google Cardboard is your best and cheapest bet).

It’s being developed with an enormous amount of technical know-how, money, and time, which means it’s going to be as flawless as possible by the time it reaches you. There is already a solid community of developers big and small that are excited to create games and other apps for the hardware, and the early signs are very promising. In short, you’re probably going to fall in love with this thing the moment you strap it to your noggin.

Why you shouldn’t actually care

Because as cool as it is to get transported via virtual reality into the game world, it’s only breathtaking the first few times you do it. Once the novelty wears off you realize how heavy the stupid thing is, how sweaty your head gets with this massive computer strapped to your face, and how much your eyes hurt once you take it off. It’s like a Taco Bell burrito—it’s amazing while you’re actually consuming it but once you’re done you kind of regret it.

Oh, and I don’t know about you, but when I’m gaming I usually have other things I’m doing as well, like sipping a soda or getting the occasional notification on my phone. Say goodbye to all that: While you’re wearing this beast because you won’t be able to see anything but the virtual world in front of you.

Of the three headsets here, your chances of owning an Oculus Rift are the best of the bunch. It’ll launch high, get cheaper, games and apps will start flooding the market, and eventually you’ll find yourself with one. It’s the virtual reality headset, and you’re going to want to be on board.

It’s the most powerful augmented reality tool ever conceived for consumer use. It’s a headset with a large semi-transparent display that makes realistic holograms appear in your field of view. You can draw in the air, manipulate blocks of virtual matter, and walk around 3D objects that don’t actually exist to anyone but you.

Microsoft showed it off for the first time this week and the tech world had a collective heart attack of joy, despite the fact that we have nothing but a promise from Microsoft that it’ll actually find its way to the consumer level at some point in the future. Take that with a boulder of salt, since everyone who has gone head-on with it comes away impressed but universally admits that it’s definitely not ready for consumers, and probably won’t be for a while.

It’s somewhere between the Oculus Rift and Google Glass in terms of how much it shuts you out from the world around you. You can certainly still see everything, and that’s sort of the point of augmented reality, but you’re still wearing a massive headset that creates virtual objects and places them in the real world, at least from your point of view. That means you’re not going to want to sit and have a conversation with someone while you’re wearing one, and you probably won’t want to talk to someone with a HoloLens equipped either.

It’s a whole new way to interface with a computer. It’s potential applications include everything from art to engineering and healthcare, and already at this early stage it’s making waves and building a lot of anticipation. If you have ever had to draw, build, design, or conceptualize something for your career, hobby, or side project, the HoloLens could potentially change the way you do it. The possibilities here are quite literally endless.

Why you shouldn’t really care

This is Microsoft, and Microsoft is one of the most talented companies in the world when it comes to making something look cool to consumers when it might very well never reach a consumer level. The gaming and entertainment possibilities for the HoloLens are absolutely massive, but thus far it seems like Microsoft would rather focus on making it a tool for creators rather than plaything, which means its appeal is significantly lessened.

There’s also nothing even close to a release date or pricing information yet, and that won’t arrive for a long, long time. I would suggest you start saving now—because this thing definitely won’t be cheap whenever you can actually buy one for personal use—but I’m not sure that day will ever arrive, and I wouldn’t want you saving your money for nothing.

That likely depends on your field of work. You’ll likely see the HoloLens take root in various fields of work before you’ll actually be able to walk into a store and buy one. That’s not necessarily a bad thing, as a lot of kinks will be worked out by the time you can use it to play virtual Jenga in your living room, but it also means you’ll be waiting a bit longer than you’d probably like.