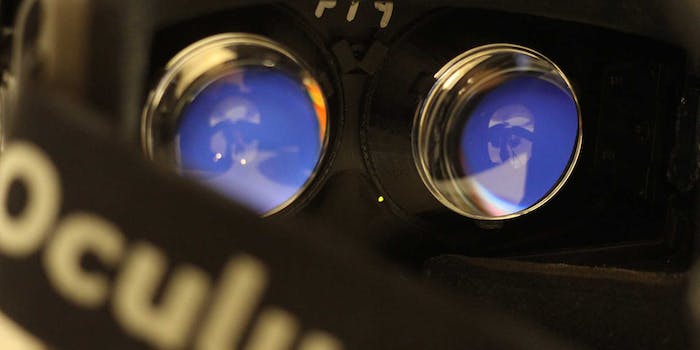 Get hands on with the creepy Oculus Rift boob-grab simulator

Someone took "hands on" too literally.

The unfortunate stereotype of gamers being basement-dwelling males with zero experience interacting with the opposite sex is getting a lot of help thanks to a homemade Oculus Rift game that—sigh—lets you squeeze a virtual woman’s boobs.

In a video posted on Japanese video sharing site NicoNico Douga, a man who goes by the handle Ryuto showcases an demo he created that allows the user to enter virtual reality for a brief meet-and-grope with a fictional anime character named Mami. There is literally no point to the experience other than squeezing Mami’s breasts, but that doesn’t appear to bother Ryuto very much.

The virtual milieu uses the Oculus Rift VR headset, a LeapMotion pressure sensor, and programmable Arduino control board. To give him something to actually squeeze, Ryuto repurposed a cushioned mousepad that features large breasts for users to rest their wrists on, and equipped it with the pressure sensor to detect the actual squeezes.

The input is registered in the virtual world and as you can see in the video, the animated girl recoils and appears uncomfortable when the user reaches out for a quick grab. That’s probably pretty accurate, as I imagine any normal woman would also recoil—and perhaps even level you with a nice hook to the jaw—if you randomly copped a feel.

It probably doesn’t need to be said, but I’ll say it anyway: This is a pretty creepy implementation of virtual reality tech, and while Ryuto should get points for his DIY skills, the fact that the digital dame is programmed to appear unappreciative at your actions just makes its purpose even more questionable. If your fantasy is to walk around grabbing boobs and making girls uncomfortable, your name should probably be added to a list somewhere.