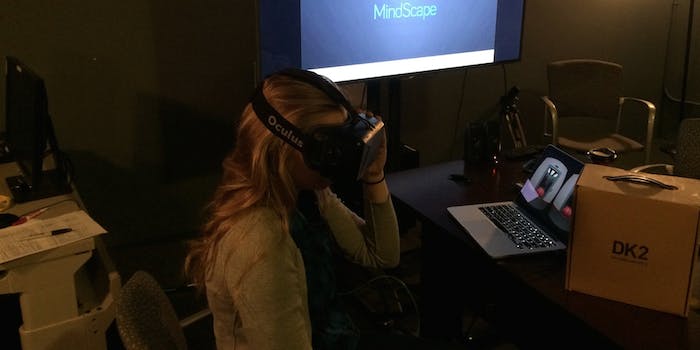 Virtual reality took me inside the mind of a schizophrenic

How one company is helping create empathy for mental illness.

The hallway was grey. Two “Exit” signs glowed red on either side of me. Elevator doors opened and I stepped through, standing in the middle of a group of people, all going up to the 10th floor. I had a job interview waiting for me at the top of the building.

But as the elevator slowly creeped up floor after floor, voices began whispering, my thoughts drifted, and faces glared at me with anger and disappointment.

The conference room in the office building where I actually stood was much more spacious than the elevator in the virtual reality headset I was wearing. I moved my head in circles, trying to look at the people in the small space around me; I almost fell over in real life. I knew I wasn’t really in the small elevator surrounded by strangers, and that the voices were simply a simulation, but the video was extraordinarily life-like. It felt uncomfortable.

That was the point.

Viscira produces videos and technology simulations for the healthcare industry, and the project I tested called “Mindscape” was created for a pharmaceutical company that wanted to give potential clients insight into what some schizophrenic patients might feel like in a real-life scenario.

Unlike audio tests or videos that show you a first-person perspective of schizophrenic experiences, Viscira’s demonstration uses the Oculus Rift headset and is entirely immersive. You can look around at each individual’s face, and up and down the hallway. Walk through the elevator, and hear voices that appear to be coming from both strangers and your own head. 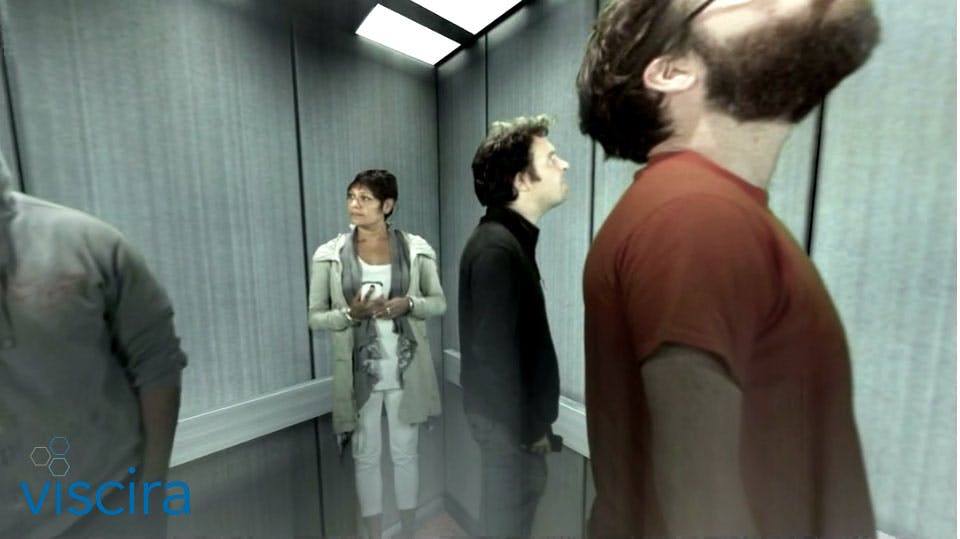 “Our client came to us and said, ‘We have some doctors, and we want to gain some empathy with their patients, on what their patients are experiencing when they have a schizophrenic episode,’” Rodwin Pabello, director of interaction and visual design at Viscira said in an interview with the Daily Dot. “So we focused on one of the main characteristics, which is hearing voices.”

The team of designers and producers worked with Viscira’s researchers to figure out the best way to simulate an episode that reflected an everyday experience that someone with positive schizophrenia would struggle with, and decided a route to a job interview in a packed elevator was an effective scenario.

To create the project, the team filmed a number of Viscira employees, who became characters in the schizophrenia simulation. They recorded whispered sentences that played throughout the simulation, including things like: “You will fail.”

I have experienced virtual reality before, but only as a way to play video games, with 3D animation. Experiencing a real-life scenario built to create empathy for caregivers is very different than joyfully running through an imaginary world.

“There is a lot you can do for mental illness with virtual reality,” Viscira’s Samantha Ready said. “Those are the diseases that are hard for people to understand, because you’re not physically sick.”

Viscira’s efforts to use first-person video technology precede the Oculus Rift. In 2011, the company created a simulation of what a patient with Wet AMD—vision loss resulting from spots formed in the eye—might see throughout the day, and challenges they face.

Although I wore the headset for just a brief period of time, the feeling of discomfort lingered.

Mindscape was not created to diagnose or help treat symptoms of schizophrenia, rather to educate people who might not be aware of what someone experiences during an episode. And it’s still in the conceptual phases of development.

Some physicians are testing other, more comprehensive forms of virtual reality treatment for people with mental disorders in clinical environments, finally extending beyond research laboratories.

Oculus Rift and other headsets have opened the doors for treatments of conditions like post-traumatic stress disorder (PTSD) and assistance with overcoming severe phobias. And some startups are even bringing affordable virtual reality therapy to clinicians, like Psious, whose technologies provide immersive treatment for anxiety disorders.

Despite the democratization of virtual reality in healthcare, it’s impossible to fully understand what’s happening in a patient’s mind.

“The big piece for psychotic disorders that is missing, and that technology might not be able to capture, is the insight piece,” Robyn Miles, a clinical social worker at the University of California, San Francisco, said in an interview with the Daily Dot. “Even if you were having this experience, you knew it wasn’t real. For a lot of mental illnesses, especially psychotic disorders, there is a lack of insight. There’s no ability to know it isn’t real.”

The wearer will never truly know what a patient experiences, but complete immersion in schizophrenic scenarios can help build a better understanding of mental disorders for physicians, caregivers, students, and family members.

After being immersed in Mindscape, I placed the Oculus Rift back down, and wandered to the other side of the table to continue the interview. For two minutes I felt different, and although I wore the headset for just a brief period of time, the feeling of discomfort lingered.

Which is sort of the point.

We already know that virtual reality tools will transform gaming and entertainment. And now we’re starting to learn how it could also transform us as people.