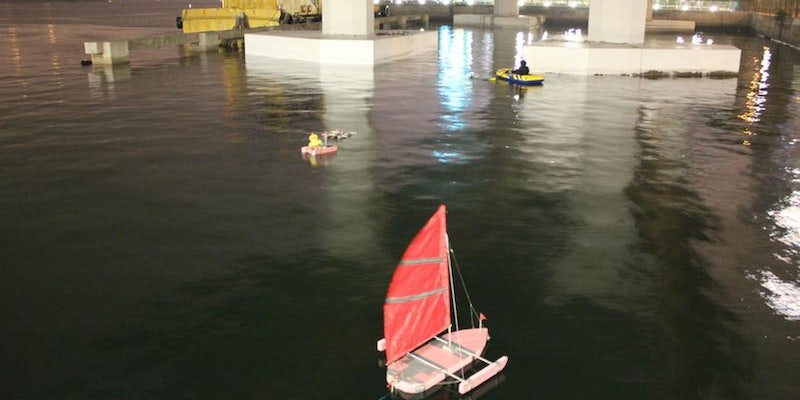 The secret to clean oceans may be robots

We should probably still cool it with the plastic production, though.

Google “Great Pacific garbage patch” if you want to feel particularly horrified at the state of the ocean: There’s a lot of trash masquerading as flotsam in our oceans. But with much of the mess in international waters, the campaign to clean up the water is largely left to nonprofits with limited budgets and staffs.

Right now, the Protei monitor levels of radioactivity and pollution, and they can’t pick up plastic or oil or other pollutants yet. But Harada plans to equip these remote-controlled vessels with cleaning tools to do so in the future. To make the drones into effective cleaning devices, they’d need to make them considerably larger than Harada’s current designs, with a receptacle to store the waste they collect. But as Harada demonstrates in his TED Talk, the drones wouldn’t have to be especially big to pull a tail of oil-absorbent material to clean up a spill.

These drones could very well change the way oil cleanup happens… and the way ocean cleanup happens in general. Harada’s sailing drone is special because he moved the rudder to the front, which allows greater remote maneuverability. This vision of smaller unmanned vessels capable of picking up or neutralizing pollutants would reduce harm for cleanup workers, and they’d be easier to maneuver than larger, less agile boats.

The community is partnering with two nonprofits to further its research, but right now, it’s a DIY movement with lots of enthusiasm but fewer resources. Protei runs $1,280 for an assembled prototype, so right now they’re more the domain of hobbyists.

But the technology has enormous potential. Unleashing Protei equipped with cleaning tools in densely polluted areas could help reduce pollution without requiring hands-on effort. Imagine cleaning up the ocean by controlling a robot boat with your iPhone! According to Gabriella Levine, a member of the Scoutbots community, the team wants to get corporations interested in their products.