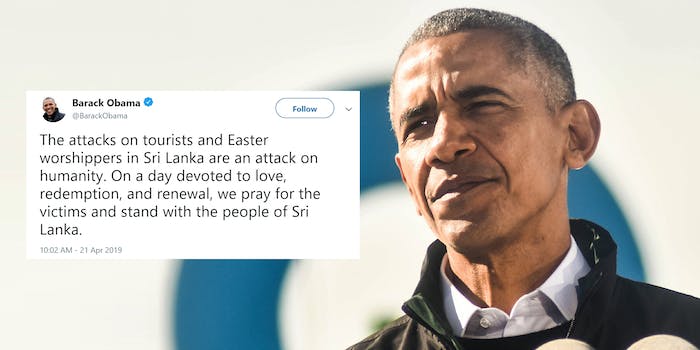 On Easter Sunday, a series of coordinated attacks were unleashed across churches and hotels in Sri Lanka, killing nearly 300 people.

Both the Sri Lankan and U.S. governments said the bombings were the work of a local Islamic militant group, National Thowheed Jamaath. Christians have long been targets of violence in Sri Lanka.

In the wake of the bombings, President Donald Trump accidentally tweeted that “138 million” people were killed, a mistake that was up on his Twitter feed for nearly a half hour before rectifying it.

In his new tweet, Trump called it an attack on “churches and hotels.”

138 people have been killed in Sri Lanka, with more that 600 badly injured, in a terrorist attack on churches and hotels. The United States offers heartfelt condolences to the great people of Sri Lanka. We stand ready to help!

Both President Barack Obama and Hillary Clinton, however, noted the nature of the attack coming on Easter.

On this holy weekend for many faiths, we must stand united against hatred and violence. I'm praying for everyone affected by today's horrific attacks on Easter worshippers and travelers in Sri Lanka.

The attacks on tourists and Easter worshippers in Sri Lanka are an attack on humanity. On a day devoted to love, redemption, and renewal, we pray for the victims and stand with the people of Sri Lanka.

Neither of them explicitly use the phrase “Christians,” or calls it an attack on Christianity, but one type of tweet was latched onto by conservatives for the supposed anti-Christian undertones of the condolence mentions.

Care to guess which?

It’s currently the top story over at Breitbart.

Similar rage was spewed at the Gateway Pundit.

Over on r/The_Donald, the internet’s Trumpiest forum, the phrase “Easter worshippers” became a flashpoint of anger.

Simply tweeting the phrase “Easter worshippers” as opposed to saying “Christians” was considered the face of “sedition, treason, and evil.”

It exploded on Twitter as these fake dramas tend to do.

I believe those “Easter Worshippers” are actually called “Christians.” pic.twitter.com/72hl2GlI6n

The genesis of the hatred is that Obama, Clinton, and Democrats are anti-Christian (and, of course, a secret Muslim in Obama’s case) and they look down on believers.

But it’s pretty well understood the Easter is a Christian holiday.

While Trump’s tweet mention’s “churches,” it is looped in with hotels and doesn’t somehow make a larger claim about Christians being targeted than noting that the bombing comes on Easter does.

But don’t tell that to his supporters.