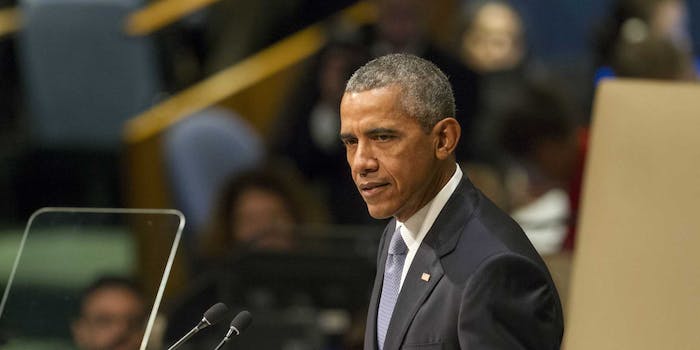 'You can control access to information, but you can’t lie about truth.'

President Barack Obama praised the power of the Internet and social media, in a wide-ranging speech before the United Nations General Assembly on Monday.

The Internet, Obama said, empowers users to “expose corruption and raise the expectations of people around the world.”

Obama also criticized censorship and repression online and off, including specific jabs at Russia‘s state-run media websites and television networks as well as Syrian crackdowns on peaceful protests.

“The range of human conflicts threatens to drag us back into a darker world,” Obama said, denouncing countries that used conflicts as an excuse for repression and violence.

“History shows that regimes that fear their own people will eventually crumble.”

Obama’s speech was met with mixed reactions. Many critics pointed out that Obama’s points against “the law of force” was undercut by the three acts of regime change undertaken by the U.S. in the last decade: In Iraq, Afghanistan, and Libya.

The vast expansion of American surveillance of the Internet and other networks over the last 14 years has also contributed to growing global mistrust.

Even so, Obama, whose administration is now reportedly considering support of widespread strong encryption, used the U.N. speech to lay out his vision of the troubling use of technology by governments.

“Technologies that empower individuals are now also employed by those who spread misinformation and suppress dissent,” Obama said.

During the speech, Obama specifically pointed to Russia’s state-run media pushing Kremlin-boosting narratives. For example, Obama said, Russia’s annexation of Crimea is emblematic of a resurgent Russia despite the extraordinary financial turbulence Russia has faced in the last year, among other problems.

“You can jail your opponents, but you can’t imprison their ideas,” Obama said, referring to Russia’s imprisonment of journalists and political dissidents. “You can control access to information, but you can’t lie about truth.”

Duda’s speech, like much of Poland’s national attention over the last year, was focused on Russia’s actions in Ukraine, where bloggers and other Internet media have provided unparalleled insight into war in recent years. Duda thanked “dedicated” bloggers active in the face of repressive regimes.

Although Obama pointed specifically to targets like Syrian President Bashar al-Assad and Russian state-owned media, his criticisms of anti-democratic ideas were broad in scope.

“It’s not a conspiracy of U.S.-backed [non-governmental organizations] that expose corruption and raise the expectations of people around the world. It’s technology. Social media,” Obama said. “When a free media can inform the public, corruption and abuse are exposed and can be rooted out.”

Responding to the idea that “strong leadership must tolerate no dissent,” Obama argued that “a government that suppresses its people is not showing strength, it is showing weakness and it is showing fear. History shows that regimes that fear their own people will eventually crumble.”