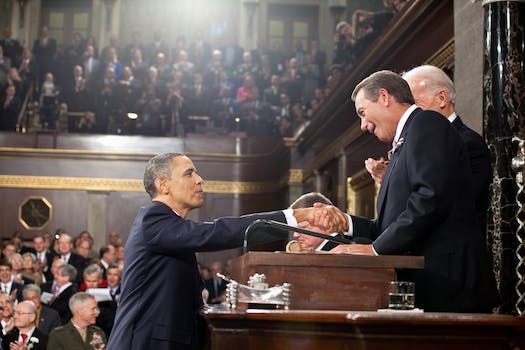 And then, two days later, Obama will host his first "Fireside Hangout" on Google+.

With just hours to go until President Barack Obama addresses the nation, the White House is preparing for an unprecedented State of the Union that will incorporate social media like never before. As the administration wrote in a press release Monday, “The President’s speech is just the beginning.”

The “virtual” State of the Union will kick off just as the president begins his address with a “enhanced version” of the speech that includes charts, facts, and other information. Last year was the first time the White House aired the address with the additional information, and it was a hit: nearly 3 million people have watched it since.

The enhanced address will be aired on the White House’s website, as well as on YouTube, Google+, Hulu, Facebook, Ustream, and iPhone, Android, and iPad apps.

The White House is also launching a tool called Citizen Response that lets people take highlights from the speech and share them online, as well as tell the president how they felt about a topic. People will also be able to take to Twitter and Facebook to voice their opinions of the speech and the president’s policies. The hashtags #SOTU and #WHCHAT will be pushed online as a way to ask additional questions. Immediately following the speech, a panel of senior staff will host a question-and-answer period with constituents, which will also be aired online. There will also be other topic-specific panels throughout the week, focusing on education, the economy, and the environment.

Then, on Thursday at 4:50 pm Eastern, the President will be hosting a “Fireside Hangout” on Google+, a play on Franklin D. Roosevelt’s iconic “Fireside Chats” of the Depression era.

“During a completely virtual conversation hosted by Google, the President will answer questions from Americans across the country about the issues and policies laid out in the speech. Anyone can submit a question for the President and vote on your favorites on the White House YouTube channel,” the press release read.