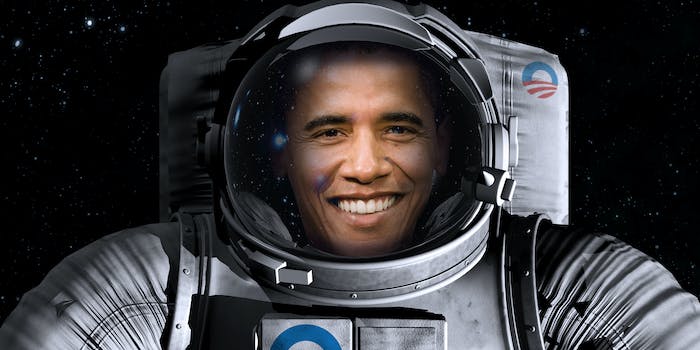 During State of the Union, Obama mapped his dreams for American space exploration.

In Tuesday night’s State of the Union address, President Barack Obama careened through a minefield of hot-button domestic issues, but he managed to make time for a a decidedly more extraplanetary one too. During an interlude of customary patriotic chest-thumping about American ingenuity, Obama made mention of the nation’s intention to not only explore but to actually colonize planets beyond Earth:

“I want Americans to win the race for the kinds of discoveries that unleash new jobs — converting sunlight into liquid fuel; creating revolutionary prosthetics, so that a veteran who gave his arms for his country can play catch with his kid; pushing out into the Solar System not just to visit, but to stay. Last month, we launched a new spacecraft as part of a re-energized space program that will send American astronauts to Mars. In two months, to prepare us for those missions, Scott Kelly will begin a year-long stay in space. Good luck, Captain — and make sure to Instagram it.”

Both the public and private sector are actively exploring the possibility of sending humans to Mars—a milestone for humankind that would have seemed like the stuff of science fiction a few short years ago.

Now, initiatives like NASA‘s Orion spacecraft and Elon Musk‘s SpaceX have their sights set on exploring and ultimately colonizing the red planet. Obama’s State of the Union comment about exploring space “not just to visit” might sound straight out of Interstellar, but it legitimates what is likely the tech and scientific community’s most mind-bending, literally out of this world dream to date.