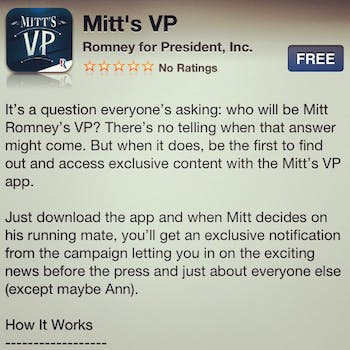 Romney's new VP app makes headlines, but the Obama campaign has a release as well.

As the Republican National Convention quickly approaches, talk of who will be Mitt Romney’s vice presidential candidate is only growing louder. Now, the candidate is using things like smartphone apps and social media to build excitement leading up to the announcement.

This week, Romney’s campaign released a new application for iPhone and Android that will exclusively inform users of the former governor’s pick before anyone else outside the campaign, including the media.

“There’s no telling when Mitt will choose his VP,” Romney’s website read this week. “But when he does, be the first to find out with Mitt’s VP app.”

The launch of the app would suggest that the pick was going to be announced in the coming days and weeks, but maybe not too soon, as the campaign would likely want to build up hype. One possible candidate is Tim Pawlenty, whose website is still suspiciously down two weeks after the Daily Dot first reported that Romney’s campaign may be trying to rebrand it. Pawlenty’s name was included in a series of tweets from Romney staffer Beth Myers, who has been heading the team to track down a VP nominee. The Follow Friday, or #FF, list also included Kelly Ayotte, Chris Christie, Bobby Jindal, Marco Rubio, Paul Ryan, Newt Gingrich, Rob Portman, Bob McDonnell, Condoleezza Rice, John Thune, Rick Santorum, and Susana Martinez.

No one knows which one of those names will pop on Romney’s VP app, nor when it may happen or if users will really be the first ones to know.

In 2008, Barack Obama decided to announce that Joe Biden was his running mate via a text message that was sent at 3am. However, news outlets across the country had been reporting Biden’s name for hours, and some people who signed up for the text messages were disappointed, according to the Wall Street Journal.

“This was not handled well at all,” one person wrote after the news leak. “A big goof up making us think that we were special; obviously we ain’t as special as the media.”

The use of an app instead of a text message shows just how much has changed in the last four years. Just in the last few months, both campaigns have launched a handful of applications, including a new Obama one just this week. Although the President has been struggling in the polls and with fundraising, one strong point of his has been embracing app technology. This spring, when Romney was having a hard time even spelling the name of the country he’d like to run, Obama was showing the Republican how it’s done. Obama’s first app had various ways for users to interact and get information about the campaign, whereas Romney put forth “Mittstagram,” sans the cool filters.

Obama stepped up the game again this week with an app that can be used for canvassing, as reported by The New York Times. It’s the first such app with the ability to connect with voter databases (although there are some apps that Romney could use for that) and can be used while going from door to door, looking for potential voters. Without a doubt, it must be the most useful app ever released by either of the campaigns, because users can enter information about how that person may vote, and that data is sent back to Obama headquarters.

Once again, while Romney will be making headlines with his app, Obama appears to be winning the apps arm race.