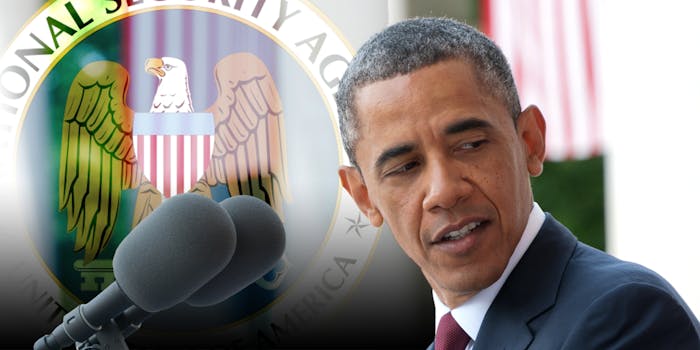 He's got a four-point plan. But privacy advocates have more than that many issues.

Though he insisted it was wrong for Snowden to leak evidence of vast NSA spying, including on Americans—”I don’t think Mr. Snowden was a patriot,” Obama said—the president nevertheless introduced a four-point plan to build back Americans’  trust in their privacy.

1) Obama pledged to work with Congress to reform Section 215 of the Patriot Act. That specific provision, which lets U.S. intelligence agencies track the metadata of any American’s phone calls. That means call times, who called who, and when, but not the content of those calls.

It’s clear that at least the House is ready to reform. A surprise amendment bill to completely defund that program, proposed by Justin Amash (R-Mich.) on July 24, very nearly passed with a vote of 217-205.

2) One of activists’ biggest concerns with the legal basis for these spy programs is that whenever the NSA needs a warrant to engage in those programs, it addresses a Foreign Intelligence Surveillance (FISA) Court, which are classified and have no one arguing the opposite side. So Obama proposed something that seems to echo a bill suggested by Rep. Adam Schiff (D-Calif.): have a public privacy advocate granted access to those hearings to fight back.

3)  His third point was accomplished by the time he started talking. Continuing to focus on the Section 215 program—the only dragnet surveillance program on Americans that the government has fully confirmed—Obama promised to release the full court ruling that allowed that Patriot Act to be interpreted to collect metadata in the first place. It’s available here. It previously was secret from the public: as it since it took place in a FISA Court, it was classified.

4) Finally, he said he commissioned an audit of U.S. intelligence practices, surveillance ones in particular. An interim report would be due in 60 days, a full one by the end of the year. It wasn’t immediately clear how much, if any, of such a report would be made public.

However, plenty of privacy advocates were highly skeptical that Obama’s reforms would fix their core concerns:

for the love of god, can someone ask if his possible reforms include stop spying on the american public? #nsa

Even if this president has “no interest” in spying on Americans, the presidency, govt certainly have *institutional* interests in doing so