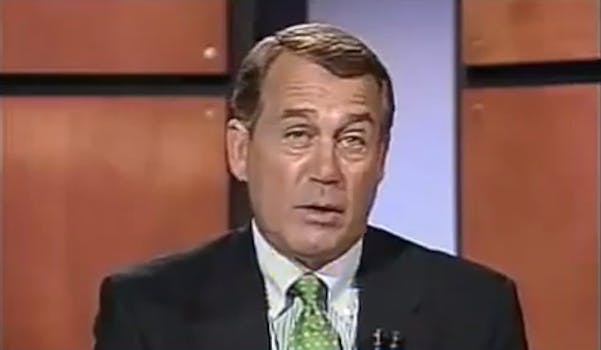 “Climate Change Deniers in Congress”—in their own words

“The icecaps are melting, which we see over and over again. Yeah, they’re melting on Mars too!”

President Obama’s grassroots campaign group has taken up a new cause: climate change.

Organizing for Action (OFA) has 20 million members and was the group that pressed home the president’s advantage in his election and reelection campaigns. It now focuses on supporting Obama’s legislative agenda.

In a new video specifically designed to make the rounds virally online, OFA identifies the primary climate change deniers in Congress by name. Using short sections of video from news broadcasts, think-tank appearances, and congressional speeches, it lets the congressmen hang themselves on their own words.

Framed by cartoon interstitials and informational statements, such as 24 Congressional requests for hearings on global warming have been rejected by Congressional Republicans, the video highlights the scientific thinking of such political luminaries as Speaker of the House John Boehner.

“Every time we exhale,” he said, “we exhale carbon dioxide.”

“The icecaps are melting, which we see over and over again. Yeah, they’re melting on Mars too!”

The unintentional star, however, may be Virginia’s Rep. Morgan Griffith, who “explains, apropos of nothing, how a minor climate change in the early medieval period led the dominance of the Vikings.

That this video has viral potential is clear. That it will shame these politicians into action they don’t want to take is far less certain. They do not exactly have a low shame threshold, if this video is any indication.