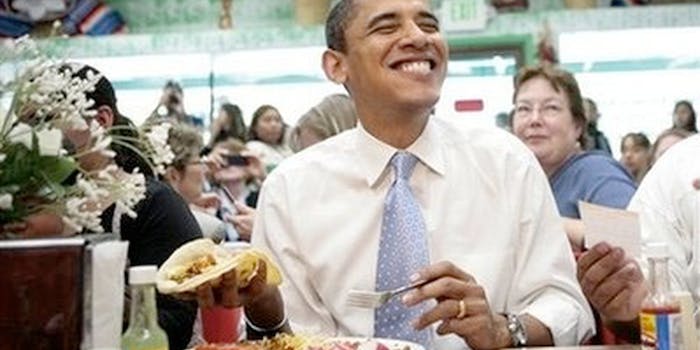 What Pres. Obama’s AMA means for the future of Reddit (Hint: It’s not what you think)

The president's unprecedented campaign stop on Reddit proves the social news site has arrived, but its mainstream success comes at a steep price.

With a few keystrokes, President Barack Obama brought down Reddit. It was if he had ordered Air Force One to drop down in the middle of some medium-sized American city, swung open the door, and told its citizens to ask him anything at all.

The most famous person to ever answer questions at Reddit’s famous interview forum, r/IAmA, brought with him a surge of attention and traffic that the site had never experienced.

The president’s visit was a benediction, the biggest moment, bar none, in the site’s history. After seven years of hardscrabble work—skeleton crews, ownership changes and financial insecurity—Reddit has truly arrived. It’s a website that even the president of the United States won’t ignore.

It’s a watershed moment that says a whole lot about the site’s future.

There’s a lot about Reddit that’s exciting, especially to the high-minded cyber-idealists who in the past have championed Twitter as the future of news and free knowledge.

Reddit’s creators hold close to an absolutist view towards free speech, a policy that has helped the site grow steadily over the past few years (and caused a fair amount of serious controversies). It’s allowed ordinary people to create things for an audience of millions, things that can change Internet culture and leak into the mainstream—-like for, instance, r/IAmA, a subreddit that’s only been around about half as long as Reddit itself and whose sole purpose when it was created was to funnel “AMA” threads outside of the main question forum, r/AskReddit.

The subreddit, r/IAmA, rose out of a wonderfully flexible system that puts the structural governance of the site in the hands of the users. It’s the reason why some guy called karmanaut (r/IAmA’s top moderator and supposedly a “law student” somewhere in the United States) held the kill switch over the president’s AMA. (Moderators can delete any thread they want in their forums, and the site’s paid staff almost never intervene.)

The president’s AMA demonstrates that Reddit’s continued growth out of obscurity, much like Twitter, will depend on absorbing the mainstream, both in terms of population and culture.

Increased population on Reddit means amplification. Reddit’s citizen journalists have bested big media at least twice in the past three months, running excellent live blogs of the Aurora, Colo., theater massacre and a shooting in Toronto. Crowdsourced fact-checking and reporting only gets better as the site gets bigger. A bigger population also means more potential scientists and historians and engineers will populate some of the site’s best question-and-answer forums.

So to a certain extent, Reddit’s watershed Obama moment could be about how its open platform is changing citizen-powered journalism and how we engage with influential public figures online.

At his AMA, however, the president answered softballs with softballs, regurgitated campaign speak that didn’t educate and didn’t change the game of politics—or even politics on the Internet. People didn’t come to Reddit because Obama had done something important through Reddit.

They came for the name, not the AMA.

The kind of intimacy and honesty that Redditors crave does not scale up to national politics, where no one ever lets down his or her guard. Instead of using the stiffness and formality of the MSM to drive his message home, Obama simply used the looseness and casual banter of Reddit to drive his message home. Here more than in almost anything else: Tech is not the answer to the problems of modern politics.

The president’s AMA proves that Reddit has arrived. But it also shows that Reddit’s future is the present that many people don’t want to admit: It’s becoming the world’s largest image forum, where famous people occasionally come to promote themselves.

A simple glance at the front page proves that point. At any given moment, the vast majority of the most popular posts on the site are images. There are occasionally videos, articles, or more and more frequently, celebrity AMAs that push their way to the top.

As the site grows to monstrous proportions, all of the things that make Reddit really great will still be there. It will still accomplish amazing things in citizen journalism, in raising money for good causes, and in engendering new political dialog. But even now the parts of Reddit that make cyber-idealists giddy are hovering delicately below the surface. They’re the exception, not the rule. For every new expert or scientist or potential citizen journalist, there are a hundred others who’ve joined Reddit to share and upvote triviality.

As the site becomes ever more mainstream, Reddit’s true gems will only drift farther down, far, far away from the “front page of the internet.” That’s not necessarily bad. The trivial is often entertaining. But it does mean that if you want to find diamonds on Reddit, prepare to bring a shovel. You’ll have to do some digging.