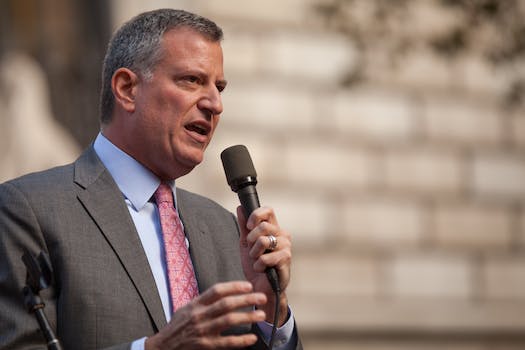 De Blasio can't catch a break from the boys in blue.

The rift between the NYPD and New York Mayor Bill de Blasio just got a bit wider.

As de Blasio addressed the graduating class of NYPD cadets at a Madison Square Garden ceremony Monday morning, the mayor was met with a mix of jeers, heckling, and lukewarm applause.

When the mayor began to heap praise onto the drift of new police officers for their bravery in facing “the problems that plague our society,” someone in the audience heckled him. “You created them!” said a voice in the crowd.

Here’s the portion of the speech de Blasio gave to the incoming NYPD officers that elicited the heckling:

“You have chosen a noble calling. You stand for everyone around you. You serve the people of the greatest city in the world. You serve in the greatest and finest police department on earth. You are here for people in need 24 hours a day. You protect others, people you don’t even know, total strangers linked to you by our common humanity. It’s a choice that few have that inner strength to achieve. But you do. It takes a special kind of person to put their lives on the line for others, to stare down the danger, to keep the peace. And you will confront all manner of problems. Let’s be honest about the realities of our society. You will confront all the problems that plague our society—problems that you didn’t create. You’ll confront poverty, mental illness, illegal guns, and a still-too divided society. You didn’t create these problems, but you can help our city to overcome them.”

It’s unclear whether the heckler was among the 884 graduating cadets or the viewing audience, some of whom also turned their backs in protest, a slight against the mayor that NYPD officers have grown fond of in recent days.

Mayor tells NYPD that they will confront problems they didn't create. Someone in audience shouts "you did" & there's faint audience applause

Rapid response from De Blasio aides: "Today was not the first time a NYC Mayor has been booed at a police graduation."

NYPD continue to show they are out of touch with the citizens they serve by booing the Mayor (again). http://t.co/wqd6pXbK0A

Typical response to NYPD protest of de Blasio this weekend was that he "brought it on himself." Same with the people they shoot, of course.

Tensions have been high between the mayor and police ever since union boss Patrick Lynch declared the NYPD a “wartime police department” following the execution-style killings of officers Wenjian Liu and Rafael Ramos, flat-out blaming them on the mayor, who Lynch charged had “blood on his hands.”

De Blasio has taken criticism from both protesters—who defied his calls “to hold political protests during this period of remembrance”—and from police, annoyed by his defense of New Yorkers’ right to protest and his appearance at events along side Al Sharpton, among other grievances. They have slammed the police reform-minded mayor for “anti-cop rhetoric.”

De Blasio pushed back against the defiance of NYPD officers, saying police were disgracing their colleagues by protesting at their funeral. NYPD Commissioner Bill Bratton defended the mayor and called the officers’ actions “very inappropriate.”