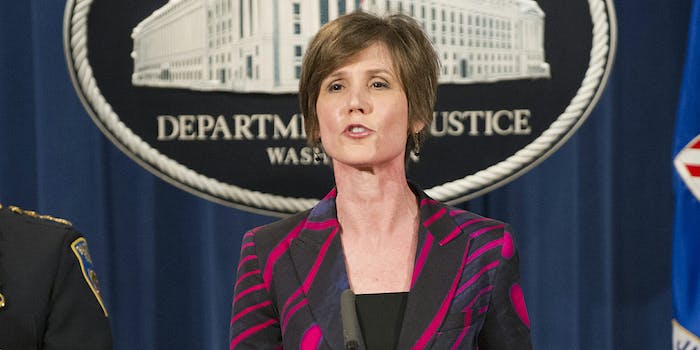 On Friday, just as former acting Attorney General Sally Yates prepared to testify before the House Intelligence Committee as part of its ongoing investigation into Russian election interference and the Trump campaign’s ties to the Kremlin, the committee’s chairman, Rep. Devin Nunes (R-Calif.), canceled the hearing.

The postponed Yates testimony serves as the latest wrinkle in an ongoing saga over the committee’s investigation, and Nunes’ handling of the situation will raise further questions over his impartiality and add more blood to the water for Democrats already convinced that Republican partisanship is threatening the integrity of the investigation.

Interesting—Jeremy Bash implies Sally Yates had revelations for House Intel about when she told WH that Flynn lied. Nunes nixed the hearing. pic.twitter.com/vKCd1jdoc5

In even more explosive a revelation made by the Washington Post, communications from the Justice Department to Yates indicate that the White House was opposed to Yates’ testimony and sought to prevent her deposition. The White House told the Post that it is “entirely false” that they attempted to block Yates’ testimony.

If the White House did attempt to block Yates from testifying, it would mean that, once again, Nunes has aligned, or reacted, in correlation with the administration’s interests. In fact, when asked, Nunes reportedly refused to deny that the White House asked that he block the hearing.

In gaggle, Nunes would NOT say if the WH asked him to scrap the hearing to prevent Sally Yates from testifying

Questioned by reporters on Tuesday over his reason for canceling the public hearing on Friday, after Yates informed Congress on Friday that she would deliver a testimony before House lawmakers alongside other intelligence officials, Nunes denied even canceling the hearing. He then implied that the public hearing was delayed so that committee members could futher question FBI Director James Comey before hearing other depositions.

Asked Nunes if WH asked him to cancel today's hearing. Response: "C'mon. … Nothing has been canceled." WATCH: https://t.co/psgEviYgWH

In the letters shown to Post reporters, the DOJ warned Yates that there were constraints on information she could present to the committee from her time serving as deputy attorney general or acting attorney general. Yates would require “consent” from the White House, the DOJ said, due to the possibility that Yates’ communication with President Donald Trump was protected by presidential privilege. Yates’ attorney, David O’Neill, argued that public White House statements have rendered that concern moot.

Yates served as acting attorney general in the early days of the Trump administration until Trump controversially fired her after she refused to defend his first immigration executive order that attempted to institute a travel ban on citizens traveling to the U.S. from seven Muslim-majority countries, which was later shot down by the courts. Her testimony before the House Intelligence Committee, however, would have concentrated on former National Security Adviser Michael Flynn and his connection with Russian officials.

Flynn was, of course, forced to step down after it was revealed that he had been dishonest about his conversations with Russian Ambassador Sergey Kislyak in late December. Yates, it was reported after Trump fired her, had notified the White House of Flynn’s lie—although the White House only acted when the news of Flynn’s meetings went public.

Yates was heavily involved in the investigation into Flynn. Rep. Adam Schiff of California, the top Democrat on the House Intelligence Committee, said in a statement that Yates’ testimony would have included information about Flynn’s “attempts to cover up his secret conversations” with Russia’s ambassador.

“Today’s hearing would also have provided the opportunity for former Acting Attorney General Sally Yates to testify about the events leading up to former National Security Adviser Flynn’s firing, including his attempts to cover up his secret conversations with the Russian Ambassador,” Schiff said.

Trust in Nunes’ objective ability to lead the investigation first frayed when it was reported that he had received information that Trump and his team were caught up in inadvertent surveillance prior to his inauguration. The information was provided by an anonymous “source” on the White House grounds.

Nunes then caused a partisan fracture in the committee when he told the White House and went public with the information before telling Democratic colleagues. Trump used Nunes announcement to validate his claims that former President Barack Obama had “wiretapped” him.

Critics are already calling for Nunes to recuse himself from the investigation and for Congress to appoint a non-partisan select committee and an independent prosecutor to ensure the investigation continues fairly. For now, however, Nunes is refusing to back down.