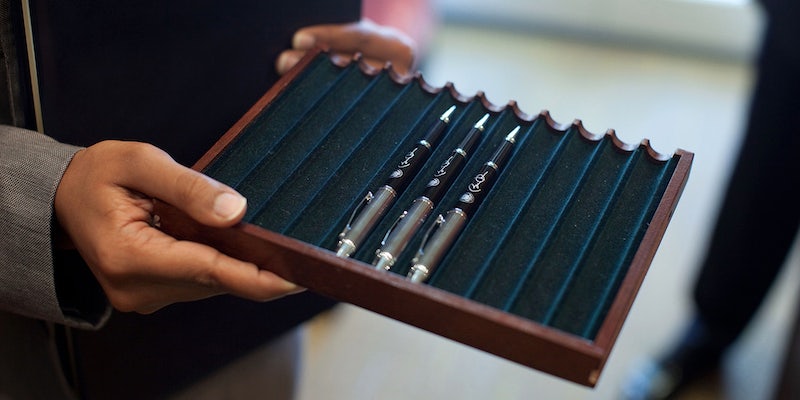 For former President Barack Obama, picking up a pen and signing an executive order was half the battle. Will the same hold true for President Donald Trump?

From an Iran nuclear pact to orders on gun control and immigration, Obama’s executive actions faced regular challenges from Congress and the judicial system while he was in office. Obama’s executive actions on undocumented immigrants and climate change remain in Supreme Court limbo. Directives issued by Obama on transgender bathrooms, federal contractor minimum wage, and overtime pay all still face obstacles at the state level.

Trump faces a very different political reality. The current system of checks and balances appear to be aligned in favor of Trump’s agenda. Both houses of Congress fell under Republican control in 2015. There are now 31 states with Republican governors. Republicans control both chambers of state legislature in 32 states, while Democrats now have control of just California, Delaware, Hawaii, Oregon, and Rhode Island. Senate Republicans hope to quickly confirm Trump’s choice for the Supreme Court.

After being sworn into office on Jan. 20, Trump immediately signed an executive order that directed the federal government to prepare for the realities of an Obamacare repeal. Some on Capitol Hill and heath care policy experts appear to be puzzled over its contents. A former Republican Hill staffer described the Trump healthcare executive order as “something incredibly cryptic that nobody understands.” Others dismissed it as merely “symbolic” and say only Congress can repeal and replace the law. But Heritage Foundation healthcare policy expert Edmund Haislmaier say that dramatic changes to undoing Obamacare through the federal government can be accomplished by the executive order Trump signed.

Trump has continued in the Obama tradition of using a combination of presidential memorandums and executive orders to guide the executive branch. Trump has used memorandums to withdraw from the Trans-Pacific Partnership and reinstate the Mexico City policy banning the use of government funds to non-governmental organizations that provide reproductive health services. overseas. He also signed a series of executive actions that would advance the Keystone XL and Dakota Access Pipelines.

“The most common misconception about executive orders is that they are inherently unconstitutional,” said John Hudak, senior fellow in governance studies at the Brookings Institution, told the Daily Dot. “Presidents have the ability to take the executive action.”

Hudak says there’s nothing unique about the issues Obama takes up with his executive orders. They fall commonly in line with that of previous presidents. But unlike other presidents, none of Obama’s actual executive orders have been successfully challenged by the courts.

Hudak did note one key difference with Obama’s approach to executive orders. “This president has been very vocal about his interest in issuing executive orders in the face of congressional gridlock,” he said.

Republicans argued that Obama’s executive orders were too plentiful and try to do too much without the input of the legislative branch. House Republicans even authorized a six-month task force to study the impact of what they believed to be an unprecedented use of executive powers in the Obama administration.

“This threat that the president’s going to run the government with an ink pen and executive orders, we’ve never had a president with that level of audacity and that level of contempt for his own oath of office,” Rep. Steve King (R-IA), the task force’s chairman, said on CNN.

At least numbers-wise— Obama wasn’t the worst offender when it comes to executive orders:

Using data from the American Presidency Project at the University of California, Santa Barbara, the Daily Dot ranked all the U.S. presidents by the number of executive orders they issued while in office. Who issued the most executive orders?

At 277 executive orders, Obama issued fewer executive orders than any two-term president since Grover Cleveland. It’s important to note that this figure does not include presidential memorandums, which Obama used to address everything from pay increases to federal employees to sanctions against North Korea. Obama issued fewer EOs than George W. Bush (291) and Bill Clinton (364), but that may change during his final weeks in office.

What exactly motivates a president to issue more executive orders? War and periods of economic crises are a common motivator, says Hudak.

“During periods of crisis, you have the public expecting more from the president,” Hudak said.

Of the 10 presidents who’ve issued the most executive orders, a total of four—FDR, Woodrow Wilson, Harry S. Truman, and Dwight D. Eisenhower—were war-time presidents. Hoover, who took office the year of the 1929 stock market crash, used executive orders to put a halt to immigration, create the Veterans’ Administration and Federal Bureau of Prisons, and give federal loans to struggling farms. One infamous Hoover executive order dictated what size of paper executive orders should be printed on (8 inches by 12.5 inches). 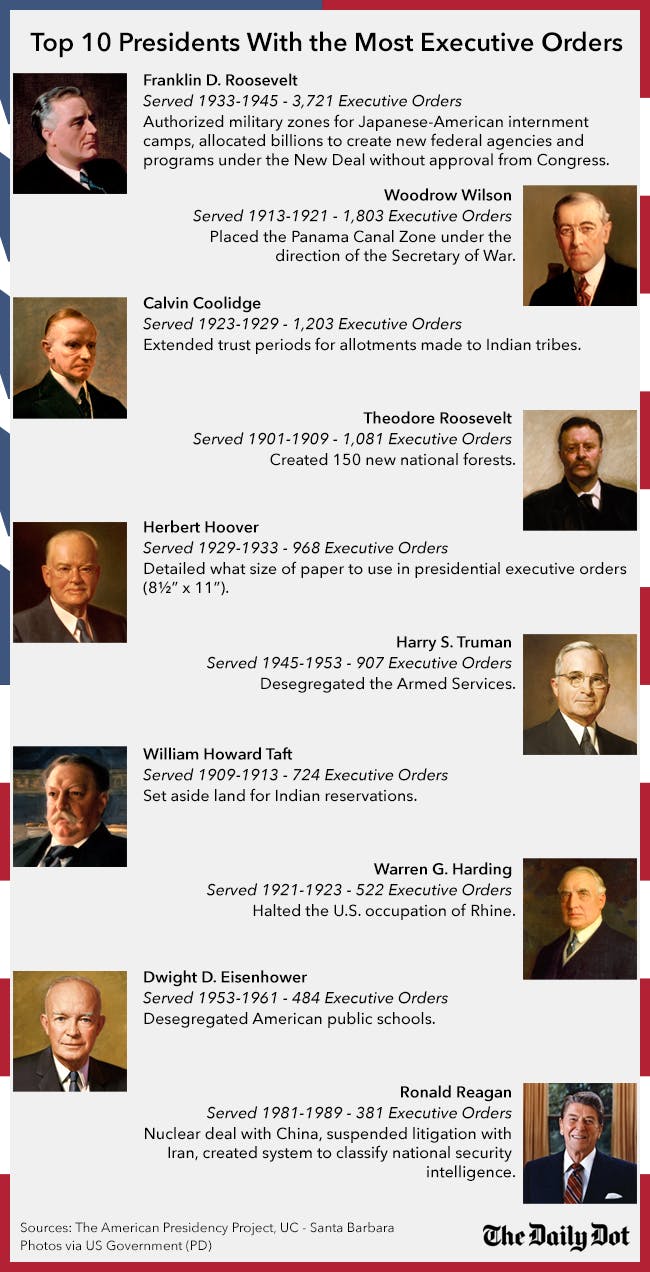 The limits of executive orders

Many scholars said that the number of executive orders is a useless metric for judging whether a president is abusing his executive powers.

“A president could issue 1,000 executive orders,” said Chris Edelson, an assistant professor at American University’s School of Government. “As long as they were all based on legitimate statutory or constitutional authority, [the executive orders] would be fine. Another president could issue just one executive order like the one FDR relied on to initiate the internment of Japanese Americans during World War II—which was later supported by Congress but should have been recognized as unconstitutional—and be way out of line.” Edelson is author of Emergency Presidential Power: From the Drafting of the Constitution to the War on Terror.

The days where presidents such as FDR were able to issue 1,000-plus executive orders and go unchallenged are over. According to Edelson, presidents can only issue executive orders in areas where a current law or the Constitution gave them the nod to do so. Presidents Truman and Clinton both issued executive orders that the Supreme Court later knocked down for not fitting such conditions. After Truman attempted to end a steel workers’ strike during the Korean War with an executive order in 1952, the steel companies sued.

“It was before the executive order’s limits had been explored in court,” McLaughlin said, referring to the period before Youngstown.

As it turns out, the limits of executive actions are many, especially once a president leaves office and political ideas lose popularity. Several of George W. Bush’s executive orders, including his 2002 secret executive order that authorized NSA warrantless wiretapping, have been ruled illegal by courts.

The future of executive orders

Donald Trump vowed on the campaign trail to undo Obama’s “bad executive orders” (i.e., those on guns and immigration) with his own series of executive orders, and thus far, he appears intent on living up to that promise.

“The one thing good about executive orders: The new president, if he comes in—boom, first day, first hour, first minute, you can rescind that,” said Trump on Face the Nation.

“People often assume that presidents can only take action through executive order,” said Edelson, but that’s far from the case.  “There are lots of controversial unilateral presidential actions—some carried out pursuant to executive orders, but not all.”

The United States’ military action against ISIS was not taken pursuant to a specific executive order by President Obama, but under laws Congress passed after 9/11. Neither was the Bush administration’s secret surveillance program, which was carried out pursuant to Department of Justice authorizations, or the bulk metadata program exposed by Edward Snowden, which was authorized by the Patriot Act.

“The key issue to me is to determine when unilateral presidential action can be justified—sometimes it can be, sometimes not—whether it is carried out by executive order or not,” said Edelson.