How a parody T-shirt beat the NSA

When the NSA went after parody merchandise on Zazzle, its scare tactics only ended up drawing more attention to the spoofs.

This is a story about what happens when the National Security Agency sends a single bullying email, and how that letter’s aftershocks can affect numbers of innocent people for years afterward.

For me, it started in August, when I learned of and wrote about Dan McCall. McCall runs a libertarian-themed novelty T-shirt company called Liberty Maniacs. It sells shirts with slogans like “I got audited by the IRS and all I got was this lousy T-shirt” and bumper stickers that say “Don’t Drone Me, Bro.”

In June, a few days after former NSA contractor Edward Snowden first leaked evidence that the agency collects the phone metadata of most Americans’ phone calls, McCall decided to capitalize. He created a shirt featuring the agency’s logo, accompanied by the joke “The NSA: The only part of government that actually listens.” The text at the bottom of the NSA seal, which normally reads “United States of America,” was replaced with “Peeping while you’re sleeping.”

Zazzle, the distributor that sold McCall’s shirts at the time, sent him an unusual cease and desist notice. It was flagged:

Here’s what’s odd about that: The NSA almost certainly never emailed Zazzle about McCall’s shirt, and he was far from the only victim of one of these takedown letters. And although the NSA likely never sent the letter, it still deserves the blame. Mostly.

The NSA hasn’t contacted Zazzle since 2011. That’s when it sent an order to stop selling not one, but 13 different items that used its seal, a Zazzle spokesperson said. Zazzle won’t share that 2011 email with anyone, or give me anything other than a stock response about its policy of taking down infringing content, but someone at Zazzle read the actual letter to McCall’s lawyer over the phone.

I only can confirm a single one of those 13 banned items. The NSA told me one was “a mug they were selling using the NSA Seal.” Incredibly, that mug was also created by McCall, though he didn’t immediately put two and two together. On the site, he had called it “NSA Parody Mug,”  and Liberty Maniacs had been selling similar items for years.

“I create thousands of products a year, and dozens of parodies, so it’s tough to remember the exact joke I put on it,” McCall told me.

“I honestly didn’t remember it being taken down and have no record of it being taken down from Zazzle—and I keep all my correspondence from them since 2007,” he told me. “I’m pretty positive that it was a very similar parody to the one all the fuss has been about, featuring their logo and a zinger.”

The NSA’s legal basis for demanding the takedown in 2011 is almost certainly bunk.

The agency referred to Public Law 96-36, they told me, and quoted the section that prohibits “any person to use the initials ‘NSA,’ the words ‘National Security Agency’ and the NSA seal without first acquiring written permission from the Director of NSA.”

However, they left out a crucial part of that same law: It only applies if the merchandise is “reasonably calculated to convey the impression that such use is approved, endorsed, or authorized by the National Security Agency.”

“No one who’s wearing a T-shirt is doing that,” cyber lawyer Mike Godwin told me on the phone.

Godwin (yes, that Godwin), would be, if such a title existed, the rock star of Defending Websites From U.S. Intelligence Agencies That Want To Intimidate People Out of Using Their Images. Back in 2010, the FBI tried a similar tactic against Wikipedia, trying to get the site to take down the agency’s seal from its corresponding page. Godwin, general counsel for the Wikimedia Foundation at the time, staunchly and publicly refused, and the FBI backed down.

“It’s usually someone who’s a subordinate who’s in charge of the seal,” he said. “They send a lawyer letter in the hope they will scare somebody out of making fun of the FBI or NSA in a T-shirt.”

Once that letter is sent, if the recipient doesn’t have someone like Godwin on retainer, the damage is done. It’s not just that Zazzle took down all 13 items in 2011. That letter had aftershocks: McCall’s shirt was one. Gawker writer Max Read, on a lark, also tried to sell shirts with the NSA’s PRISM logo on them. Even though those shirts don’t actually say “NSA” anywhere, and the agency didn’t even create that logo, Zazzle still took them down.

“I had a nearly identical experience,” Abe Voelker said, emailing me out of the blue after he read my first story on McCall. Instead of McCall’s straight NSA logo with different text, Voelker simply used the Electronic Frontier Foundation’s Eagle-with-headphones logo. It’s a piece of original art that parodies the NSA, and it’s available under a Creative Commons license that explicitly allows uses like Voelker’s. Voelker just wanted a shirt with that cool logo on it: 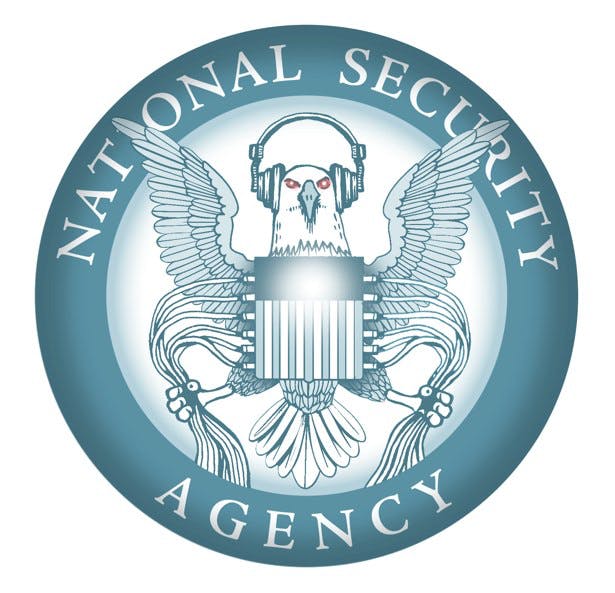 “We had a bit of back-and-forth (if you call their canned responses that I guess), including one in which they seemed to have copied and pasted copyrighted text from the Marines website in an attempt to define ‘fair use,’” he told me.

Voelker sold a single one of those shirts, to himself. Then he got an email from Zazzle, almost identical to the one the company sent to McCall, saying his shirt “c]ontained content which infringes upon the intellectual property rights of National Security Agency (NSA). This includes all products containing the agency’s logo, full name and its acronym (NSA).”

He sent me the entire correspondence where he tried to reason with Zazzle. It was like talking to a brick wall, and he eventually gave up.

Sending a bogus intellectual property claim, all dressed up in lawyerly language with intent to intimidate or censor, is a well-documented Internet phenomena. It’s called a “chilling effect,” and Harvard’s Berkman Center for Internet and Society maintains a website to track copyright takedowns, in the hopes of exposing bad uses of copyright law.

“If the NSA is actually actively policing use of its logo and initials and citing to law as a reason,” Adam Holland, the program’s coordinator, told me, “then yes, that would constitute a serious chilling effect on public discourse.”

The law in question forbids use of the NSA’s materials in a way that is “reasonably calculated to convey the impression that such use is approved, endorsed, or authorized by the National Security Agency,” he explained.

“I’m… pretty sure that that’s not what’s happening here.”

McCall, for his part, has been doing well for himself. A dyed-in-the-wool American, he’s taken what could have been a bureaucratically-imposed setback and turned it into a way to make money.

He’s since moved his NSA shirts (and mugs, and iPad cases, and so on) to Zazzle rival CafePress. The company says the shirt has been one of its bestsellers since his story made the news—it’s #7 on the site right now. Orders have more than tripled, McCall said. The money’s rolling in.

“[Zazzle’s] in the business of printing T-shirts,” Godwin told me, “They didn’t expect to get involved in anything, and they don’t want to.” Bowing to an order from the NSA is “a perfectly sensible response,” he said.

CafePress, for its part, doesn’t need to take a stand. It will come as no surprise to anyone familiar with how haphazardly intellectual property can be enforced on the Internet to learn that the NSA didn’t send the company a similar letter. So it, too, gets to reap the rewards of that single misguided takedown notice, sent two years before.

In Park Slope, Brooklyn, on Tuesday, I ran into a middle-aged woman wearing the T-shirt. Surprised, I stopped her, and asked her how she heard about it.

“I’m a lawyer,” she said. “I read about this somewhere, that the NSA was trying to block people from buying this shirt.”