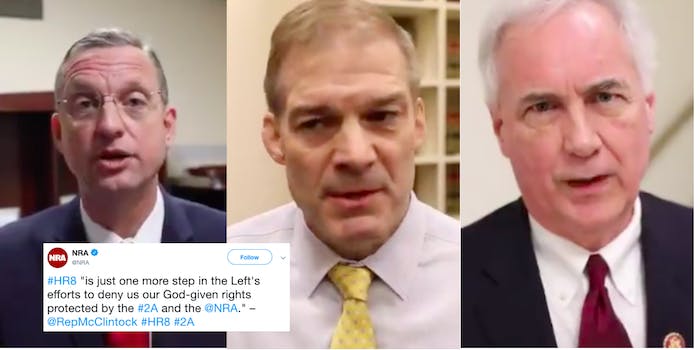 On the eve of the anniversary of the mass school shooting in Parkland, Florida, the National Rifle Association took note of the occasion by releasing nine video testimonials by Republican congresspeople decrying the Bipartisan Background Checks Act working its way through Congress.

The act would close what’s known as the “gun show loophole,” which allows unlicensed gun dealers to sell guns without conducting a background check.

Most of the representatives attempt to paint the legislation as an extreme measure furthered by Democrats alone, which ignores the fact that universal background checks enjoy broad bipartisan support among Americans, including 74 percent of NRA members.

In his testimonial, Collins calls the act “a gun grab” and claims it is “basically a fraud that’s being perpetrated along the victims of mass violence,” and says it “simply wants to get at your constitutional rights.”

.@RepDougCollins is spot on, #HR8 is a fraud and just attacks our right to self-defense. #2A @JudiciaryGOP pic.twitter.com/HkmJVansF8

#HR8 "is just one more step in the Left's efforts to deny us our God-given rights protected by the #2A and the @NRA." –@RepMcClintock #HR8 #2A pic.twitter.com/49BhE0p56P

Jordan says that the bill is a “direct assault on the Second Amendment,” and promises that Republicans are going to tack amendments onto it, likely designed to either kill it entirely or neuter its widely supported mandates.

The Democrats "are trying to put a pretty face on this idea of "universal" background checks." Make no mistake, there is nothing pretty about #HR8 and how it targets law-abiding citizens. Thanks, Rep. @Jim_Jordan for defending #2A. pic.twitter.com/9S2pGcQMPO

Reschenthaler baselessly says that the act isn’t about background checks, but “creating a national gun registration that will of course lead to confiscation just like we’ve seen in Great Britain and Australia.”

Like some of her colleagues, Lesko claims that the bill wouldn’t have prevented any mass shootings, but fails to mention that the vast majority of gun violence and deaths do not occur in mass shootings and that the weight of evidence indicates that universal background will reduce gun violence. In 2016, NPR reported that two studies had found that background checks significantly reduced gun violence; similarly, easing restrictions on weapons’ purchases increased gun violence.

Many of the NRA’s followers were, predictably, thrilled by the videos. But some were less-than-impressed by the timing of the assault on universal background checks, coming just hours before the first anniversary of 17 people losing their lives in the Marjory Stoneman Douglas school shooting.

“You are posting this propaganda on the anniversary of #ParklandStrong, you ghoul. It is bad enough watching a congressman who has sold his soul to the @NRA death merchants, but even worse today #39000,” one wrote in response to McClintock’s video, apparently referring to the nearly 40,000 gun deaths in the U.S. in 2017. “Shameful, today of all days,” said another.

You are posting this propaganda on the anniversary of #ParklandStrong, you ghoul. It is bad enough watching a congressman who has sold his soul to the @NRA death merchants, but even worse today. #39000

Others noted that several, if not all, of the representatives, had received campaign donations from the NRA. “NRA gave you $2,500 last election. Your soul comes cheap, eh?,” one responded to Gaetz’s video, in which he said that Democrats “were trying to make it hard for law-abiding citizens to be able to access their rights.” The legislation is co-sponsored by 230 Democrats and five Republicans.

Several pushed back on the lie that background checks will be used as a ruse to create a national gun registration and confiscate weapons. “Guy, I really hope you stretched before that massive leap,” one wrote of Reschenthaler’s parroting of this talking point.