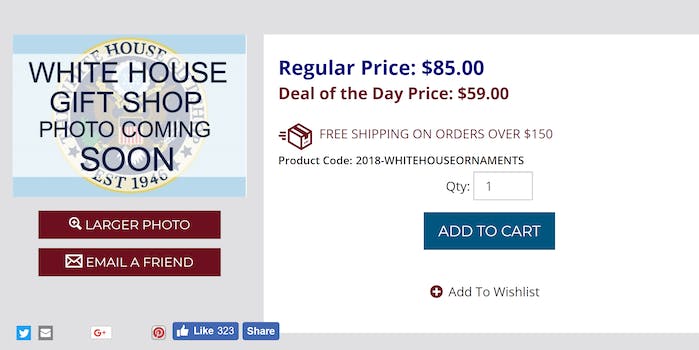 A self-own for the history books.

When President Donald Trump canceled the highly anticipated North Korean summit this week, it left the White House’s gift shop with an interesting decision to make: What about all the commemorative coins?

The online shop settled on putting the memorabilia up for sale regardless of whether the meeting ever happens. That was great news for people hoping to get a coin to remember what was almost a historic day.

But when people visited its product page, they were met with an error message. It appears the website was down for several hours, adding insult to injury for the White House. As of this writing, the site is still having problems loading the coin’s product page. We were, however, able to load it with a bit of patience and a few refreshes.

In an effort to clear out inventory, the gift shop is running a limited-time closeout sale. If you can get the page to load, the “deal of the day,” a “post-summit” coin, can be purchased for a measly $19.95, down from $24.95. Another pricier coin, which retailed for $85 can now be purchased for $59.  It comes with “elegant raised Icons & Historical Iconographs,” “Asian Design Motifs with Harmony as the Unifying Design Theme” and a 24-karat gold finish. Oddly, there are no image previews for the coins, so you’ll have to trust the White House on this one.

The tokens were made to complement a commemorative coin unveiled earlier this week. It showed Trump and North Korean leader Kim Jong-Un facing each other. The coin, minted by the White House Military Office, was ridiculed for its unflattering depiction of Kim, who, as people eagerly pointed out on social media, looks a few chins overweight.

The White House downplayed the embarrassing design, claiming it didn’t have any input in the manufacturing of the coin. Despite the apparent slight, the coin, bordered by the symbolic olive branch, was meant as a symbol of peace between the two countries.

Of course, this was before Trump sent an open letter to Kim on Thursday explaining why he canceled the meeting that was set for June 12 in Singapore.

“Sadly, based on the tremendous anger and open hostility displayed in your most recent statement, I feel it is inappropriate, at this time, to have this long-planned meeting,” Trump wrote. “I felt a wonderful dialogue was building up between you and me, and ultimately, it is only that dialogue that matters.”

The White House was met with criticism on social media after the cancellation, with many joking about the Nobel Peace Prize talk surrounding Trump.

just finished ordering $100,000 worth of Singapore Summit coins. now to take a big sip of coffee and check the news

Another barrage of ridicule was sent to the administration during the few hours the website was completely unreachable.

I have been trying to buy that goddamned summit, coin but the White House gift shop web site works about as well as our current foreign policy.

People who purchased the commemorative coins before the summit was canceled can get a full refund from the gift shop website. However, the gift shop claims most people want to keep the “heirloom of political history.”

“The Ornament Will be Made Whether or Not the Summit Occurs as Scheduled,” the website reads. “If Summit Does Not Occur You can Request a Refund but Most Supporters Have Said They Want This Heirloom of Political History Regardless of Outcome.”

Trump said he is still “very much looking forward” to meeting Kim. Until then, he only has a few bargain coins to show for his efforts.