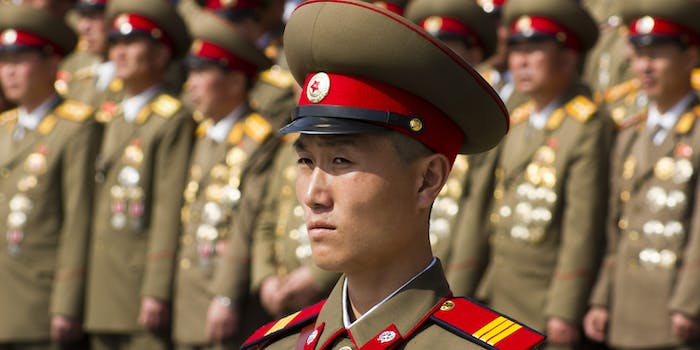 The ominous warning comes as U.S. warships move toward the Korean peninsula.

North Korean officials have reportedly told journalists in the country to ready themselves for a “big and important event” as tensions with the U.S. continue to escalate and American confidence in President Donald Trump’s handling of the situation wavers.

Over 200 journalists are in the nation’s capital ahead of the regime’s ‘Day of the Sun’ holiday celebration on April 15, which marks the 105 years since the birth of Kim Il Sung, North Korea’s founding leader and the grandfather of current dictator Kim Jong-un.

Patriotic celebrations such as this are often an opportunity for propaganda and posturing, a parading of force and a show of military strength. While regime officials refused to clarify details on the “big” event, the statement comes as Japanese ships join the U.S. navy “armada” that Trump ordered to the region.

North Korea has engaged in ongoing nuclear and ballistic missile tests for years and is currently preparing its sixth nuclear test. As the possibility of long-range nuclear missiles capable of reaching the U.S. western seaboard comes ever closer, neighboring Japan and South Korea alongside the U.S. have voiced serious concern.

However, after Trump’s high-profile military strike against the Syrian government last week, following a devastating chemical weapons attack carried out by Bashir al-Assad’s forces, State Department officials heightened tensions significantly by stating that similar action is on the table for dealing with North Korea. Trump then ordered the Navy strike group to deploy in the region.

The North Korean regime slammed the move as “reckless” and warned that U.S. aggression would be met with nuclear force.

Americans split over the president’s handling of the increasingly volatile situation. A CBS News poll published Thursday found that more than half of respondents—primarily Democrats and independents—expressed that they felt “uneasy.” The hard-line policy pleases 78 percent of Republican participants, who expressed “confidence” in the president’s actions, but only 12 percent of Democrats.

Even though Trump’s missile strike on Syria, in particular, pleased traditional party Republicans— notably Sens. John McCain (R-Ariz.) and Lindsey Graham (R-S.C.)—the provocative foreign policy decisions indicate that he has abandoned his anti-interventionist stance entirely over the course of the past week.

This dramatic turnaround has divided the president’s most fervent supporters and alienated his electorate’s far-right demographic, some of who have vowed never to vote for him again.

A popular distraction from the frustrated and unfulfilled promise of domestic reform, this volatile strongman approach to foreign policy could lead to a very real conflict. In times like these, North Korea’s “big and important event” is anticipated with anxiety.