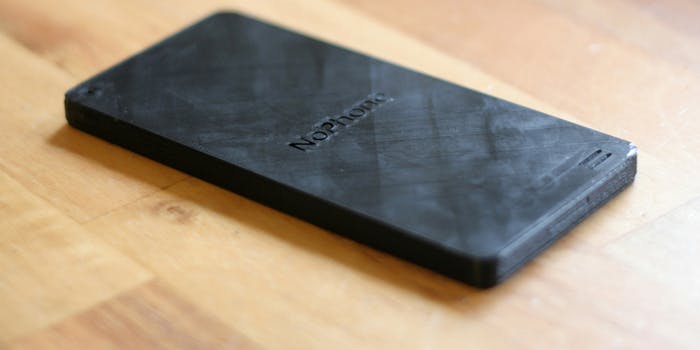 Could the NoPhone be the cure for my smartphone addiction?

This is a clever way to deal with addiction.

I was unnecessarily anxious about work on Christmas. I suspected an important email, text message, or phone call from a colleague might come through any moment. Here I was, eager to relax over the holidays, but nonetheless tethering myself to the Internet just as my parents asked if I wanted to join them on a long walk.

If I took my smartphone on the walk, I wouldn’t really experience the walk at all. Why take in the picturesque wheat fields of my Virginian youth when I could be refreshing my iPhone’s email client to make the fun squiggle wheel appear?

I left my phone on my bed and pocketed a solid plastic brick of comparable size, shape, and weight instead. This was the NoPhone, a gadget that seemed to blur the line between gag gift and therapeutic device. One of its most touted features is its waterproofness. If you meet the NoPhone creators in person, you’ll be glad to learn that the team doesn’t make the mistake of taking itself too seriously.

“We were at the bar one night and everyone was on their phones, kinda drunk,” said Van Gould, co-creator of the NoPhone. “That’s when we came up with the idea.”

The company launched after a Kickstarter pre-order campaign that collected 915 backers and more than $18,000. The NoPhone resonates with people all over the world. Gould said he had “received orders from every country I’ve heard of.”

Here in the United States, walking with my parents at my side and a NoPhone in my pocket, I am glad to tell you that I felt no temptation to check my email. One consciously knows that one can’t get Internet on a piece of solid black plastic, so it’s useless to take it out of your pocket and try. But your body feels that familiar smartphone-sized bump against your leg and notices that it’s not being removed. For a short time, the NoPhone effectively fooled me into thinking I had phone-resistant willpower.

Unable to scratch my email itch until I got home, I had no other choice but to be here, now, bleh. If mobile Internet connectivity is a problem for you, perhaps a liberal application of the NoPhone will solve it.

What’s next for Gould and his team? He told me that there was sincere interest in a NoTablet.