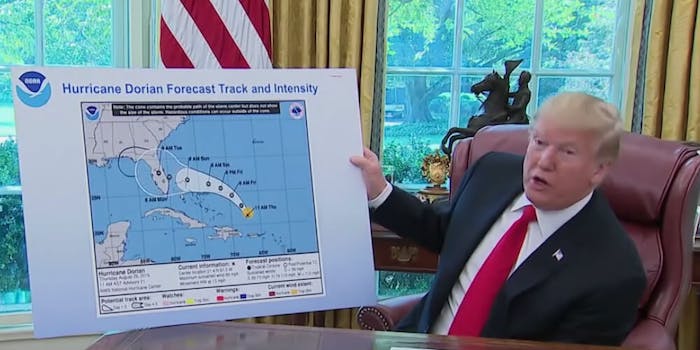 NOAA has backed Trump's claim that Hurricane Dorian was once a threat to Alabama, contradicting the NWS.

On Friday, the NOAA released a statement, claiming that “from Wednesday, Aug. 28, through Monday, Sept. 2, the information provided by NOAA and the National Hurricane Center could impact Alabama.”

Whoa! Nothing like throwing your "Alabama" NWS office under the bus. pic.twitter.com/Fx0oAdWlh7

Trump first made the claim on Sept. 1, that “Alabama will most likely be hit (much) harder than anticipated,” along with Florida, South Carolina, North Carolina, and Georgia. Shortly after, the National Weather Service in Birmingham, Alabama, wrote that “Alabama will NOT see any impacts from #Dorian. We repeat, no impacts from Hurricane #Dorian will be felt across Alabama.”

Trump then doubled downed his efforts to prove that, yes, Alabama was going to be affected by Hurricane Dorian by showing a map of its projected path–which included Alabama, courtesy of Trump’s Sharpie-drawing skills. And, voila, “Sharpiegate” was born. He has since continued to push the Dorian-Alabama conspiracy.

The NOAA criticized the Birmingham National Weather Service, alleging that it “spoke in absolute terms that were inconsistent with probabilities from the best forecast products available at the time.” The NOAA not only contradicted the NWS but itself as well, because, NOAA spokesman Chris Vaccaro said on Sunday that “the current forecast path of Dorian does not include Alabama.”

Many are upset that the NOAA–a trusted source for vital information with the ability to impact life and death–is now enabling Trump and his incorrect statements.

“Let me assure you the hard working employees of the NWS had nothing to do with the utterly disgusting and disingenuous tweet sent out by NOAA management tonight,” Dan Sobien, president of the National Weather Service Employees Organization, wrote.

Bill Read, the former National Hurricane Center director, wrote on Facebook that employees were ordered to stay silent about the matter and called the statement “embarrassing,” “heartbreaking,” and “disappointing.”

“As I see it there are two possible drivers leading to the statement. Either NOAA Leadership truly agrees with what they posted or they were ordered to do it. If it is the former, the statement shows a lack of understanding of how to use probabilistic forecasts in conjunction with other forecast information. Embarrassing. If it is the latter, the statement shows a lack of courage on their part by not supporting the people in the field who are actually doing the work. Heartbreaking,” Read wrote.

What has transpired since Mr. Trump's statement on Sunday about Alabama being at risk from Dorian has led to the…

Meteorologists are also speaking out against the statement, which seemingly undermines their work.

“Perhaps the darkest day ever for @noaa leadership. Don’t know how they will ever look their workforce in the eye again. Moral cowardice,” David Titley, former NOAA chief operating officer and meteorology professor, tweeted.

I am appalled by the National Oceanic and Atmospheric Administration.

This is simply not factual.

A sliver of Alabama had a 5% or less risk of winds well below hurricane force.

This is a complete and utter disgrace. The NWS in Birmingham's tweet was 100% spot on with the absolute terms it chose at that time, and anyone telling you otherwise is a liar. Trump is taking NWS, arguably the most effective government agency & trying to ruin it to save face. https://t.co/tm8AVPQqfF

Perhaps the darkest day ever for @noaa leadership. Don’t know how they will ever look their workforce in the eye again. Moral cowardice.

I'm so sorry for all of my incredible colleagues in the NWS and at the NHC who work so hard to communicate life-saving information to the public every single day. We stand with you, especially with @NWSBirmingham.

I am proud to work for @NWS. You will not find a more dedicated bunch, committed to saving lives and helping communities. But I am utterly disappointed and embarrassed by our parent agency’s actions today. The damage done to relationships built on trust is worrisome at best. pic.twitter.com/LXnevXiTkz

This statement from NOAA about the NWS Bham tweet Sunday that Alabama would not have impacts from Dorian is a BALD FACED LIE.
The tweet Saturday by the NWS in Birmingham was correct. pic.twitter.com/Ju7gyj35YX