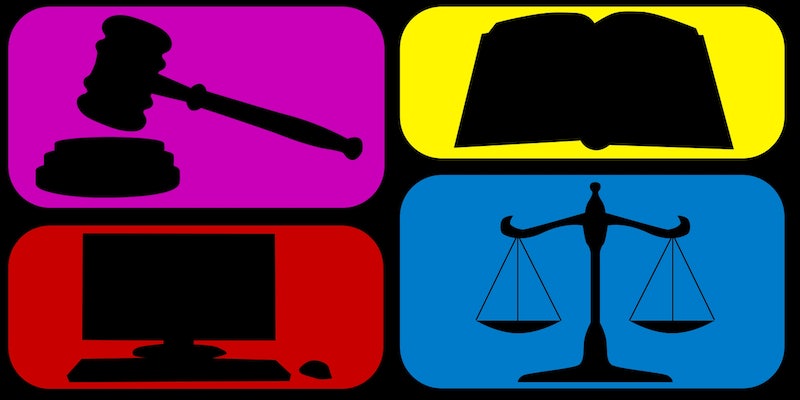 The days of hosting lyrics sites that don't pay up to record labels appear to be over. And other sites, like Rap Genius, are being swept up in the flood.

We all know the phenomenon: Google your new favorite song’s lyrics, and you’re greeted by dozens of interchangeable sites, like lyricsmania.com, anysonglyrics.com, lyricstime.com, all clamoring for your pageviews. But an industry group, the National Music Publishers Association, has declared in a press release that “unlike the sound recording business, the lyric business may be more valuable in the Internet age.”

So the NMPA has a message: either pay up, or we’re suing you for copyright infringement.

To that end, the lobbying group has sent Digital Millennium Copyright Act (DMCA) notices to what it deems are the Internet’s top 50 “unlicensed” lyrics sites—meaning ones that don’t register and share their profits with music companies. (Some of the biggest lyrics sites, including azlyrics.com, are registered already.) If the companies don’t respond by either taking down the majority of their content or registering with music labels, the NMPA will respond with “legal action,” a representative told the Daily Dot.

Their case is likely a strong one, at least for sites that simply repost lyrics, in bulk, without adding much, intellectual property lawyers say. Mark Jaffe of Tor Ekeland, P.C., told the Daily Dot that lyrics are “copyrighted material.”

“By the strict letter of the Copyright Act, the publishers, assuming they have the rights, would have good footing under the copyright law,” Jaffe said.

At least one of the 50, however, is known for far more than simply blindly reposting lyrics. By their own independent metric, the NMPA ranked lyric commentary site Rap Genius as the worst of their 50 offenders.

“Rap Genius is so much more than a lyrics site!” site founder Ilan Zechory told the Daily Dot, before noting that he’d yet to see a DMCA notice from the NMPA. “The lyrics sites the NMPA refers to simply display song lyrics, while Rap Genius has crowdsourced annotations that give context to all the lyrics line by line, and tens of thousands of verified annotations directly from writers and performers.”

Were Rap Genius to contest a potential lawsuit from the NMPA, it could end up with a better chance in court than cookie-cutter lyrics sites, Jaffe said. Rap Genius could claim that its content is the fair use commentary it offers on lyrics, and that it’s necessary to use those lyrics as context for that commentary.

As for generic lyrics sites, however—at least the ones hosted in the U.S.—their days are likely numbered.

“I think there’s a good chance a major copyright crackdown on lyrics websites will drive most of those websites out of the industry (at least, those with US operations),” Eric Goldman, Director of Santa Clara University’s High Tech Law Institute, told the Daily Dot. “It’s a shame, really, because I find such websites frequently useful, and the copyright owners of the lyrics typically don’t provide an alternative convenient authorized online venue for song lyrics.”