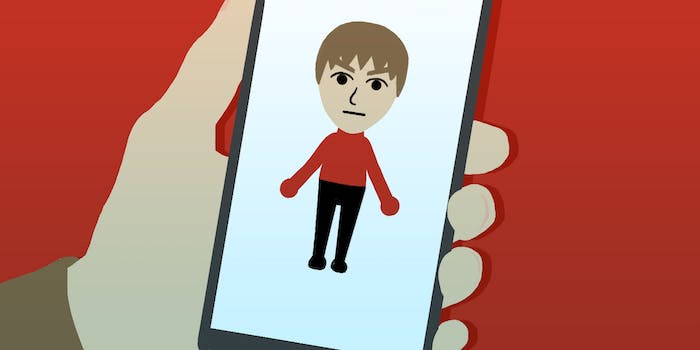 Nintendo’s first smartphone game has nothing to do with Mario, Luigi, Link, Yoshi, Donkey Kong, Pikachu, or anyone else from its stable of beloved characters. It’s all about you.

The Wall Street Journal has reported from a press conference in Tokyo on Wednesday that Nintendo President Tatsumi Kimishima announced Miitomo, Nintendo’s first smartphone app, which will be released in March 2016.

Miitomo will be a free-to-play social networking game built around Mii avatars, similar to those that Nintendo players currently use on the Wii, Wii U, and Nintendo 3DS platforms.

Miitomo players will create Mii avatars in part by answering a series of questions about themselves. These Mii avatars will then communicate among each other without direct input from the player by way of helping users who are hesitant to talk about themselves to other people. Paid add-ons will eventually be released for Miitomo.

“Miitomo is designed to appeal to a wide range of global smart device users and introduce them to uniquely Nintendo experiences beginning with Miitomo and carried through future applications,” reads a statement from Nintendo to the Daily Dot.

Miitomo sounds spiritually similar to the StreetPass system where players’ 3DS handhelds pass Mii information back and forth when the handhelds are in range. You then greet other players in a game called Mii Plaza and learn where the player is from, what they want to be when they grow up, and what 3DS games they’ve been playing recently among other things.

Miitomo is one of five smartphone games that Nintendo is developing in partnership with DeNA, a giant in the Japanese mobile game market. They will be released by March 2017.

Game developer Shigeru Miyamoto, who is also a senior managing director for Nintendo, clarified that DeNA will operate the smartphone games while Nintendo will concentrate on promoting its hardware.

Nintendo also announced a new service called “Nintendo Account.” Kotaku has reported details on the new service that will hook Twitter, Google Plus, and Facebook into Nintendo’s existing account system built around Nintendo ID, to integrate smartphones and tablets, PCs, and dedicated game hardware like the Wii U and 3DS into a single ecosystem.

Nintendo Account will also be tied into the new My Nintendo membership service, a loyalty program similar to the defunct Club Nintendo program through which players may earn points via purchasing or playing Nintendo games. In the past Club Nintendo users would use points to purchase downloadable games and physical rewards from the Club Nintendo shop.

My Nintendo will launch simultaneously with Miitomo in March 2016.