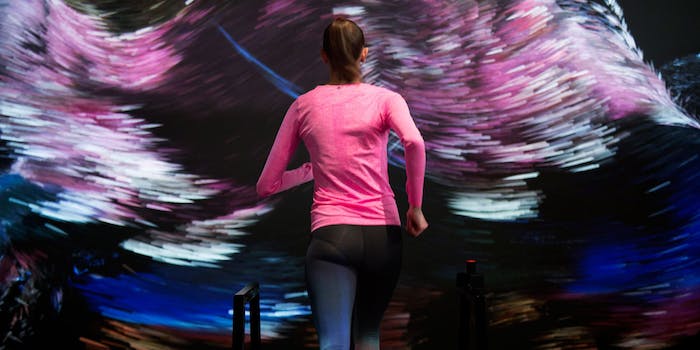 Is this really what runners want to see?

Nike has tried all kinds of high-tech ways to get us to take up running as a hobby, from wearables to apps to games, but the shoe company might have gone a bit too far with its latest project. Nike’s Force of Nature is an art installation built for the Nike Innovation Summit, and it’s kind of like taking a jog through a creepy, exploding version of your own body.

When a runner steps onto the specially equipped treadmill, a Kinect motion sensor and other fancy hardware capture his or her activity and turn it into a super-trippy 3D animation. The colors of clothing, pace, and overall movement give each run a unique visual representation, though it’s hard to discern exactly what is happening on the screen.

Nike describes Force of Nature as follows: “The installation takes the runner through a journey of immersive visual effects that amplify the feeling of getting into the flow of running.”

The project seems to be a one-time affair, and it’s unlikely you’ll ever be able to experience such a thing in your own home. Given how bizarre the entire thing is, though, that might be for the best.