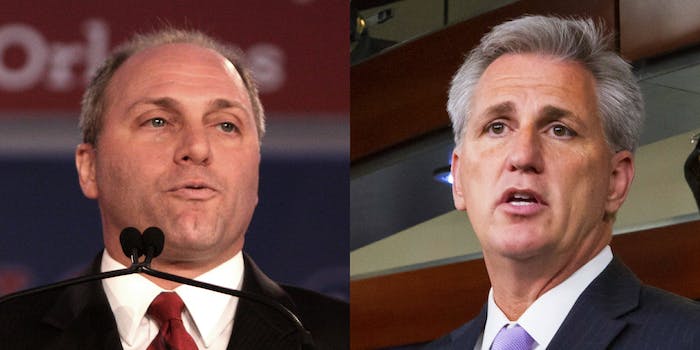 Rep. Paul Ryan (R-Wisc.) is departing as Speaker of the House and setting up a power struggle that is filled with intrigue.

The Republican party has definitely split under Trump and the Speaker of the House battle might help define the future of the GOP. Or at least the way that it looks on Capitol Hill.

The unabashed pro-Trump stances of the contestants in the race for Paul Ryan’s speakership is definitely the most important aspect of this political battle. They are all willing do Fox hits and they echo Trump’s attacks on his perceived enemies. There are no “never-Trumpers” in this bunch.

The Speaker is the face of the ruling party and is required to spend hours his days fundraising for his colleagues. It’s also an enormously powerful position; he or she decides which committee will consider bills and even govern the proceedings on the floor. The Speaker also appoints members to select committees and conference committees. In short, a Speaker can control the way that Congress functions.

Each of the men in the race, represents a faction of the Republican party as it looks under the president. The old guard (represented by McCarthy) is firmly embedded in the swamp. They might frown at Trump’s tweets but they’ll trade the snide remarks online for big tax breaks.

The Christian conservative wing of the party (as represented by Scalise) still has some reserves about the president, but they have bought into the big rhetoric coming from the Oval Office.

Lastly, the Freedom Caucus always has their say and they’re known to hold the legislative process hostage in order to accomplish their goals. They’re into Trump big but are still staunch idealists who hate government spending and will never cozy up to the Democrats.

Paul Ryan has said that he plans to stay through the midterm elections in November. a decision that has angered plenty of GOP lawmakers. While some Republicans might want a new person leading them through 2018, they probably aren’t likely to get it because their party needs Ryan’s phenomenal fundraising talents through November.

McCarthy, who currently serves as majority leader, is the favorite for the role. In an NBC interview last week, Paul Ryan even gave the Californian the nod, saying, “I think we all believe that Kevin is the right person.”

Kevin McCarthy represents the establishment brand of the party; or at least the establishment wing in the era of Trump. He’s decent at fundraising and pads his pockets with money from Wall Street donors, which is important because one of the primary responsibilities of the Speaker of the House is to solicit donations for the Republican National Committee. If McCarthy were to become Speaker, it would signal a victory for the Ryan loyalists in the party and would probably mean that the House is going to continue to function as it has for the past few years.

Ryan’s support of McCarthy isn’t surprising, he’s his top lieutenant and they’ve been in the same crowd since they authored a 2010 book together titled “Young Guns: A New Generation of Conservative Leaders.” While he still models a loose blend of conservatism, McCarthy has been much more eager than Ryan to woo President Trump. After a trip aboard Air Force One, the lawmaker noticed that Trump favors red and pink Starbursts and in an only-in-2018 tale, he tasked an aide with separating those flavors so he could put them in a jar and deliver them as a gift to the president, according to a Washington Post report.

The difficulty for McCarthy and his allies will be convincing the more conservative wings of the party that he’s right for the job and they might do that by reiterating the California lawmaker’s close ties to the president. In 2015, he was unsuccessful in his run for the Speakership and that failure is probably attributed to the notion that he wasn’t conservative enough. If he is able to take the gavel in the upcoming election, it probably means that loyalty to Trump has become a more desirable trait than loyalty to the conservative ideals that McCarthy lacked in 2015.

Steve Scalise currently occupies the third-most powerful Republican position in the house: Majority Whip. Scalise represents a more consistently conservative wing of the GOP than McCarthy and has drawn plenty of criticism for his anti-LGBT stances. He voted against LGBT hate crimes legislation and headlined an event put on by the Family Research Council, a group that declares on their website “homosexual conduct is harmful to the persons who engage in it and to society at large, and can never be affirmed. It is by definition unnatural.”

Last week, Scalise’s office said that he will support McCarthy in the speakership race, throwing a bit of cold water on a heating conflict. But if McCarthy fails to get the votes necessary for the gavel, expect Scalise to try to take it himself. Even with his declaration of innocence, plenty of whispers on the Hill involve his name. Unfortunately, Steve Scalise is not a star fundraiser. If he were to rake in big bucks in the next quarter, that could earn him some votes. The Republicans know that Paul Ryan’s fundraising talents are going to be irreplaceable, but they still need a speaker who can still pull in dough.

Scalise’s allies represent a more conservative branch of the party that still holds a significant amount of power under Trump. They’re the same lawmakers who denied McCarthy the speakership in 2015 and they hope for a principled conservative voice to lead the new House. If they rally together enough power, they could definitely cause trouble for McCarthy.

Jim Jordan almost certainly won’t be Speaker of the House, but his faction of the party—the Freedom Caucus—is known for throwing sand in the congressional gears. Jordan gets plenty of television face time, where he regularly stirs up trouble. With his colleagues in the Freedom Caucus, Jordan has regularly leveled attacks at Mueller. Last week, he even theorized that Rod Rosenstein tricked Trump into firing Comey in a bizarre coup.

Most of the Republican rank-and-file has little taste for the freedom caucus’ no-holds-barred legislative style that Jordan embodies. When asked by Politico how he felt about the freedom caucus, former Speaker John Boehner famously boiled his feelings into a succinct pair of words about Jim Jordan: fuck Jordan.

What is possible, is that Jim Jordan’s run will force the Republicans to bend to the Freedom Caucus and elect somebody a little feistier and more conservative than Kevin McCarthy. And that person may well be Steve Scalise. If McCarthy’s allies are hoping for a clean run at the speakership, they’d better keep their eyes on Jim Jordan and the Freedom Caucus.

The next Speaker of the House (or minority leader) will have at least two years under Trump but for McCarthy, Scalise and Jordan, that doesn’t seem to be much of an issue. Though he managed to pass major tax reform, Paul Ryan will probably always be known as the speaker who didn’t stand up to Trump, as the president hijacked Ryan’s beloved party-of-Reagan and Frankensteined it into the shock politics of early-morning tweets and rambling stump speeches. But the contestants for Ryan’s gavel have already discarded the Reaganesque ideals for those of the current commander-in-chief.

It will be Trump’s House going forward, no matter who wins.