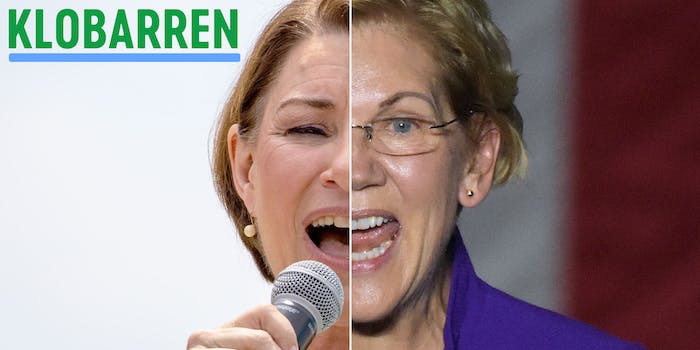 It's a new type of drug.

Do you have feelings of dread and anxiety over the approaching 2020 election?

Concerned about the potential of a second Trump administration?

Worried about shifts both left and right, the countervailing forces of progressivism and nationalism?

Klobarren is a new type of endorsement from the New York Times editorial board. Whereas previous endorsements’ focused one candidate as a choice for president, Klobarren’s radical new formula lets you pick two.

Sunday night, the New York Times announced its choice for the 2020 Democratic nominee for president. It came after a week of hype from the newspaper of record, releasing the transcripts of its interviews with leading candidates, teasing the pick as part of a new TV show, The Weekly, streaming on Hulu.

And their choice for president? Either Sen. Elizabeth Warren (D-Mass.) or Sen. Amy Klobuchar (D-Minn.), because while pushing for bold policy proposals is great, maybe it isn’t; and because running as a progressive is important, but what if it’s not; and because now is a good time for the Democratic party to take a shift to the left, but also maybe it should tack to the middle.

If that sounds bizarre, illogical, and downright nonsensical, welp, sorry. The future of the Democratic party is Klobuchar or Warren. Who knows? Not the New York Times.

“In 2020, both the radical and the realist models warrant serious consideration,” the Times wrote of its decision to pick two of a number of Democrats, instead of the traditional one candidate. “If there were ever a time to be open to new ideas, it is now. If there were ever a time to seek stability, now is it. That’s why we’re endorsing the most effective advocates for each approach. They are Elizabeth Warren and Amy Klobuchar.”

If that sounds like an absolution of responsibility and a dereliction of duty from the leading editorial board in America, it is. Because as divisive as this primary is, the one thing everyone could agree on last night was this was a terrible way to pick a president.

crazy announcement from the nytimes pic.twitter.com/OYr3hJswdn

SO THE NEW YORK TIMES ENDORSED WARREN *AND* KLOBUCHAR AHAHAHAHA

absolute nonsense completely devoid of any policy, rhyme or reason other than IDPol.

Someone tell the New York Times if you vote for two candidates your ballot will get thrown out https://t.co/MVa6OC1Skt

Please consult a doctor before trying Klobarren, as it is physically impossible to do so.

You can read the Times’ reasoning for Klobarren here.