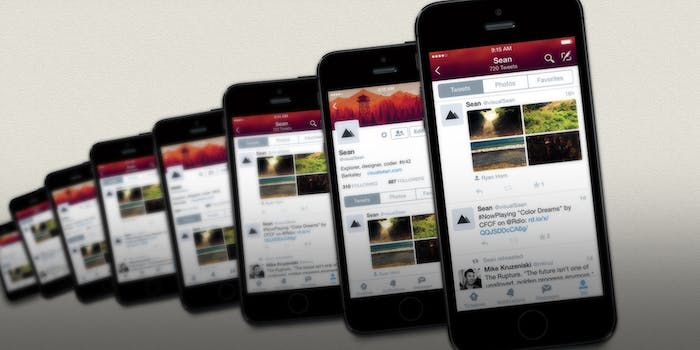 Twitter has pushed a huge update for its iPhone app just in time for iOS 8, bringing new features and a completely redesigned profile page.

Twitter is taking full advantage of the iOS 8 notifications update, allowing you to retweet, favorite, and follow directly from push notifications.

The profile redesign—which is available for everyone using iOS 7 or above—is the biggest design change to profiles Twitter has ever done. Twitter profiles now feature tweets, photos, and favorites prominently, with photos receiving a much-improved layout.

Bios are also no longer a swipe away, now visual as soon as you click on a profile. Essentially, Twitter is trying to make things a little more personable: The platform is primarily about what users are saying (or rather, tweeting), and less about who we are. This update evens things out a little more. Of course, the ability to act on notifications is just a nice way to get us into Twitter faster.

Twitter says an update to its Android app is in the works, but didn’t say when it will arrive. You can download the updated Twitter for iOS now.