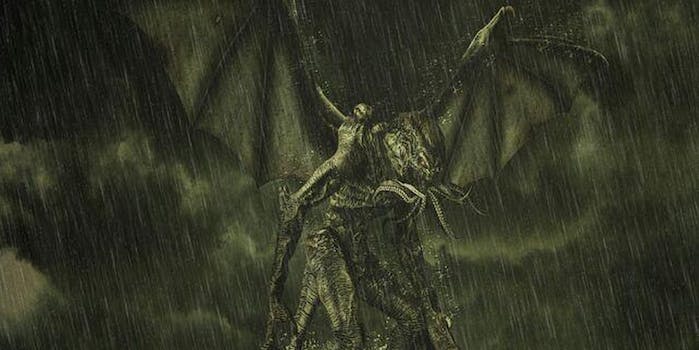 The Great Old Ones have risen—and they don't take American Express.

It’s been nearly a century since H.P. Lovecraft first revealed unto us the rites of Dread Cthulhu, the giant tentacle monster who inhabits the deep Arctic seas, biding his time before he rises from his slumber and turns us all into his terrible minions.

But if you’re nervous that your dark tithes and tributes will be insufficient to please the Great Old One, you might want to begin squirreling away the new cryptocurrency, Cthulhu Offerings. The “offerings” currently come for 2.5, with the value of the coins halving every six months around—what else?—the seasonal equinoxes, when, as the website informs us, “the time draws near, the return of The Great Old One is upon us.”

In addition to allowing you to prepare for the rise of the city of R’lyeh, the offerings (OFF in currency shorthand) also allow you to find daily special blocks of coins, compete to get extra currency points, and enter to win a special randomized reward—after every 666th transaction, of course:

During the last five days, the ‘Tharanak shagg,’ or “promise of dreamland,” the ritual reaches final pitch and the daily special blocks are highly increased… Cthulhu will return after the xxx665th offering has paid tribute to the Great Old One and he will bestow a bounty deserving of Him upon one lucky worshiper.

The Cthulhu wallet also contains plenty of goodies. Upon downloading it, the console urges you to “speak directly to the altar from this window to perform the rite of Mu,” and invites you to “speak evil unto Cthulhu or a fellow Cultist.”

Although the coin was first developed in September, it has gone through a few variants with each changing season. The latest version features a “Voices from the Deep” alert system. You can also lay your offerings at Cthulhu’s feet for a few extra coin points.

All in all, while there’s not curently a lot you can buy with Cthulhu’s tithings, this is a pretty cool way to enjoy cryptocurrency, especially if you’re new to trying it out.

Although we’re pretty sure that if you begin hearing actual voices from the Deep, not even a well-stocked Cthulhu Offerings wallet can save you.