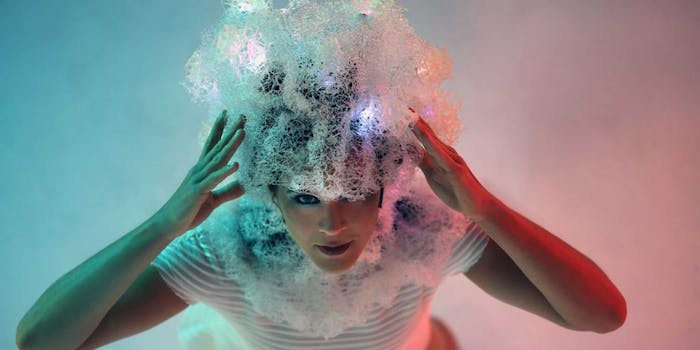 NEUROTiQ from Sensoree is a mood ring for your brain

Wear your mood on your head, rather than your sleeve.

The old saying “give someone a piece of your mind” takes on a whole new meaning if you’re wearing NEUROTiQ headwear, recently unveiled at New York Fashion Week. The high-tech fashion statement flashes brilliantly in a variety of colors, but it doesn’t do it randomly; this peculiar mixmash of electronics and nylon knitting can actually show everyone around you what your brain is up to. NEUROTiQ is the creation of Sensoree, a collective of designers and artists that promote what they call “extimacy,” or intimacy pushed outward. To that end they’ve developed NEUROTiQ to be the ultimate external expression of the wearer’s brain.

It might look like a massive, unorganized cobweb, but the NEUROTiQ headwear is actually a cutting edge piece of technology. Hidden beneath the nylon netting is the Emotiv Epoc EEG system which features 14 points of contact that sense and decipher brain wave patterns. The headset—which costs a minimum of $399 at retail—is one of the few consumer-level brain-monitoring devices currently available. 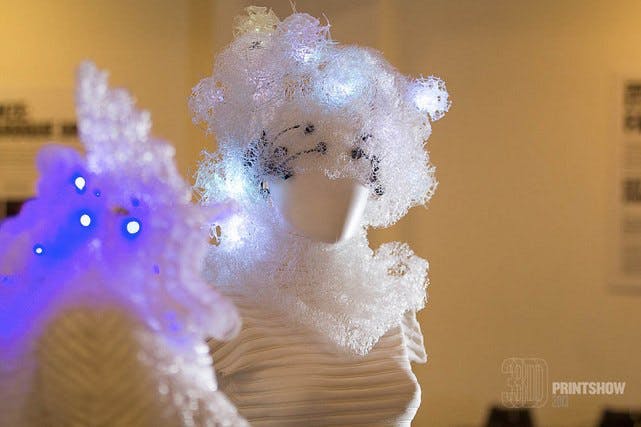 To create the desired “mood ring”-like effect, the headset is rigged to communicate its readings through spherical, misshapen blobs that Sensoree calls “globules.” Depending on the reading, the light emitted from the globules can shift between several different hues.

Delta waves, which suggest sleep, are red. Theta, which appear during deep relaxation and meditation, are orange. Beta, which signals a sharp, alert mind, are yellow or green. Gamma, which Sensoree calls a “multi-sensory brain state,” is blue or purple.

Between 3D printing the globules, knitting the nylon covering, and programming the colorful responses, the NEUROTiQ project took upwards of 130 hours to finish. Whether that was time well spent depends on your point of view, but whatever your stance, credit must be given for such a original and strangely revealing piece of fashion.