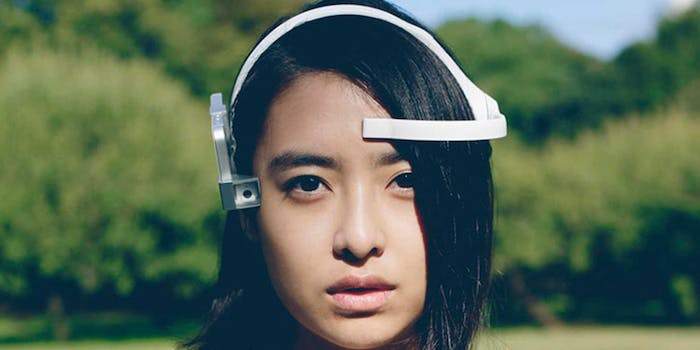 This device takes your brain, turns it into animated GIFs

Every wondered what your brain translated into animated GIFs would look like? Us too...

Wearable technology has made major progress in the past few years, with Google Glass debuting and body-monitoring technologies like FitBit gaining mainstream popularity. But many people, myself included, are still adjusting to the idea of wearing a camera strapped to your forehead as a thing we’re doing now.

But there are far stranger wearable technologies out there, including the Neurocam.

The Neurocam is a wearable camera that uses a special monitor for brainwaves to analyze emotions and create GIFs from life moments. It’s a remarkably ambitious project from a Tokyo-based team called Neurowear that creates prototypes of potential communication tools using biological signals.

The Neurocam kind of looks like a bulkier, Apple version of Google Glass, since it features a small camera near the forehead, but with an iPhone attached at the ear. The brainwave reader sits on top of the head like a particularly high-tech headband.

Yes, you read that right. The Neurocam scans your mind-grapes to make looping videos of what you see. More specifically, the Neurocam scans brainwaves to gauge the wearer’s interest level in what’s going on around them. When the “interest” or “like” level hits 60 or higher on a scale from zero to 100, the Neurocam automatically creates five-second GIFs of what’s happening, acting as a kind of ambient recording tool triggered by brainwaves signaling interest. The GIFs are saved in albums and users can share them on Facebook.

The scale for determining whether or not someone is jazzed enough to record GIFs was developed by Professor Yasue Mitsukura from Keio University. Mitsukura developed her brainwave reading scale in 2012, and it is said to be able to tell when people show interest, concentration, desire, stress, or sleepiness in real time.

Unlike other methods of brainwave reading, Mitsukura tells Daily Dot that her scale doesn’t look at alpha or beta waves, focusing instead on frequencies she believes can indicate interest levels: frequencies called XXHz,XOHz, and XXXHz. The Neurocam only measures interest, perhaps to keep things simple as the team continues to fiddle with the design.

The Neurocam isn’t available yet and is still just a prototype, although the Neurowear team demoed it at the Human Sensing 2013 conference last October. You can view the demo on YouTube.

And just FYI, the Neurocam is actually one of Neurowear’s least quirky projects. The company previously created a furry tail for people to attach to their lower backs that wags according to brain activity. It’s called the Shippo and I’m sure certain factions of the brony community have plenty to say about it. It also made a kitten-ear headpiece that relaxes and tenses up based on brainwave activity.