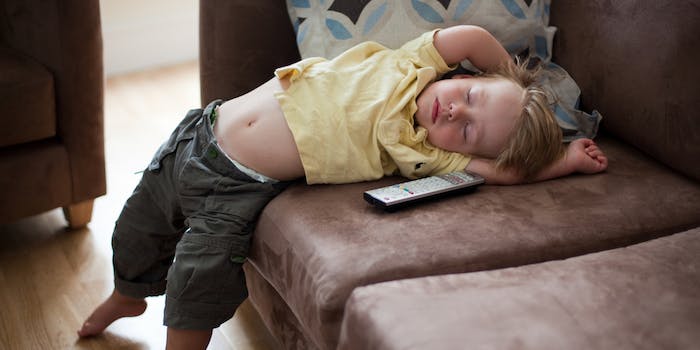 This Netflix hack will pause your movie if you fall asleep

Napping is great, but not losing your place during Scandal is even better.

Ever fallen asleep while watching Breaking Bad and woken up six hours later to see one of your favorite characters getting killed because the browser had skipped through an entire season while you were unconscious, thereby spoiling the episode you were previously watching? You know how it’s basically the most devastating thing ever, in part because it takes hours for you to go back and find where you left off? An awesome hack from Netflix’s internal 24 Hour Hack Day wants to make sure that never happens to you again.

Here’s the Sleep Tracker, which uses data from a Fitbit to figure out when you’ve fallen asleep during a streaming movie, and pauses the film at that exact spot:


Here’s how it works: As the Fitbit user falls asleep, the device registers the data to its API that’s connected to your computer. That allows Netflix to pause your movie/TV show at the exact place where you fell asleep.

When you wake up, you see a notification telling you that you fell asleep. You’re then prompted to continue your movie or TV show at your “sleep bookmark.”

It’s a pretty ingenious—and useful, so long as you have a Fitbit—idea, but it’s only one of a series of awesome hacks to come out of the internal Netflix hackathon, such as Playlists (which helps you organize content you want to watch into multiple playlists, rather than just going back to the same giant queue) and Radial, a custom keyboard that makes it easier for you to type out searches on your console.


Unfortunately, none of these hacks will actually be integrated into the Netflix user experience anytime soon, because they’re basically just intended for Hack Day. But isn’t it nice to dream? Just not when you’re watching House of Cards.