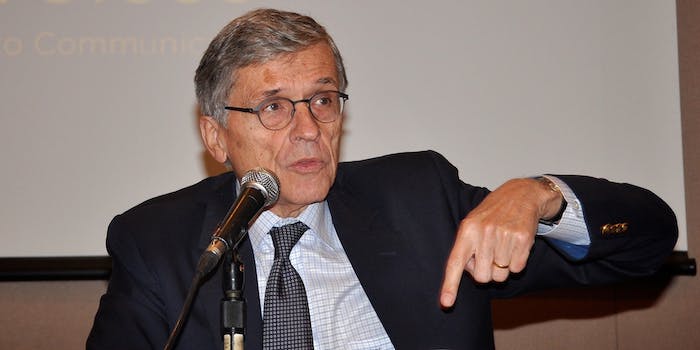 The real reason the FCC delayed its net neutrality decision

The FCC insists it's still playing by its own rules, not Internet providers' or the President's.

The Federal Communications Commission’s seemingly suspicious timing in delaying its net neutrality decision has absolutely nothing to do with recent politics, an FCC official tells the Daily Dot.

The official, who asked to remain anonymous, said it’s instead a matter of some people in the agency insisting they be more prepared before going to court to defend their eventual plan.

On Monday, President Obama began a multimedia campaign that called for the FCC and its chair, Tom Wheeler, to preserve net neutrality, the overwhelmingly popular ideal of keeping Internet providers from charging extra for accessing certain sites at full speed, by reclassifying broadband Internet service as a public utility through Title II of the Communications Act, a 1934 law.

FCC representatives raised eyebrows when they declared Tuesday that the agency would not, as previously hoped, finally settle the issue of how to and whether to preserve net neutrality. The situation seemed all the more political because Obama had campaigned on a promise of net neutrality, did little about it in his first six years of office, then suddenly renewed his vigor on the subject after his Democrats lost the Senate in the recent midterm elections.

In January, the U.S. Court of Appeals in Washington, D.C., ruled in favor of Verizon, which challenged the FCC’s 2010 Open Internet rules, striking down the agency’s net neutrality protections. The court found that the FCC did not use the proper legal structure to establish its regulatory authority over broadband service—something that many legal experts say would not be the case if the FCC invokes Title II.

So the seemingly political move to delay the net neutrality decision was just a coincidence, according to the FCC official, who said the delay was in order to be better prepared to defend itself in court:

Before the president weighed in, several of our staff felt like the record was a little thin in areas, and the last thing you want when you go to court for the third time is for a court to say the record was too thin, or you didn’t give adequate notice. We are going to be so careful this time that we have crossed every T and dotted every I. Some of the staff felt we’re not quite there yet.

The official was also quick to point out something the Huffington Post, like Daily Dot contributor Marvin Ammori, reported about a small meeting Wheeler held in the immediate aftermath of Obama’s call for Title II. Namely, that while Wheeler did indeed refer to the type of “hybrid” policy solution he’d previously considered, he wasn’t actually declaring that he wouldn’t agree to Title II. Instead, the official said, that line was Wheeler referring to his previous position.