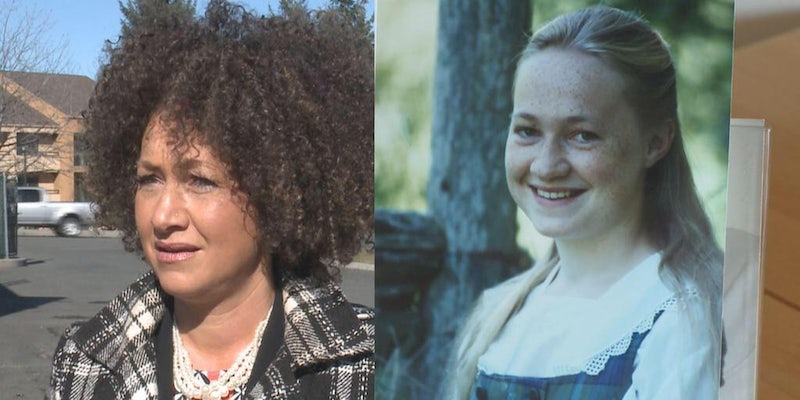 What had happened was.

Meet Rachel Dolezal, one of the most recognizable civil rights activists in Spokane, Washington. Dolezal is an adjunct professor at Eastern Washington University, a freelance columnist, and the leader of Spokane’s local NAACP chapter.

Dolezal is by her family’s account white—Czech, Swedish, and German, with some Native American heritage, according to her mom—which is problematic given that she’s built an identity around being an African-American woman. And amid swirling controversy about Dolezal’s heritage on Thursday, she responded to KXLY4 reporter Jeff Humphrey’s query in telling fashion.

Said the ABC affiliate’s reporter: “Are you African-American?”

“I don’t understand the question.”

Then she walked away.

It’s a damning moment for Dolezal, who has been aggressive in purporting a seemingly false black identity. Social media, particularly Twitter, was merciless and made #RachelDolezal an instant top trending item in the United States.

EWU PROFESSOR RACHEL DOLEZAL BLACK IS BEAUTIFUL LECTURE & HAIR SHOW https://t.co/F9cdSPhka2 via @YouTube bro she was ALL IN bro ALL IN

When you gotta turn the warmth up & fix ya filters to appear black #RachelDolezal pic.twitter.com/l4ZaXdaZ0p

She really pulled a Lucille Bluth in that interview. #RachelDolezal pic.twitter.com/aCdX8Mrksz

Damn…Iggy Azalea left the accent off when she wasn't rapping…this #RachelDolezal is a WHOLE NOTHER LEVEL!

"we're all from the African continent"
ok but your ancestors left 125,000 years ago#RachelDolezal

Scrolling the #RachelDolezal hashtag, I've seen over 10 different braid/wig/scarf hairstyle pics. She was committed. That's a lot of money.

"This #RachelDolezal story reminds me of my undergrad years at Howard…" pic.twitter.com/E8KyGA7ZoO

Rachel Dolezal went to China and got one of those Afro kits. I'm sick.

The City of Spokane is investigating whether Dolezal violated the city’s code of ethics by way of lying about her race on her citizen police ombudsman commission application—Dolezal identified as African-American.

In a piece for urban weekly Inlander,“Let Us Breathe,” Dolezal rallied about the #BlackLivesMatter movement while using language like “We have not been silent.”

Dolezal was also publicly critical of the Oscar-nominated film, The Help:

Rachel Dolezal, a professor of Black Studies who rotates between Eastern Washington and North Idaho College, and is a leader for NIC’s Black Students Association, said she wished the film had never been made. Her main dislike stemmed from all the money Kathryn Stockett, the author of the novel and a white woman, made off of this book and film.

However, some in the African-American community have come to her aid because of her career as an advocate for civil rights.

So she is an NAACP chapter pres, went to Howard, a professor of Africana studies? Bro she just love black ppl…Chill lol #RachelDoelzal