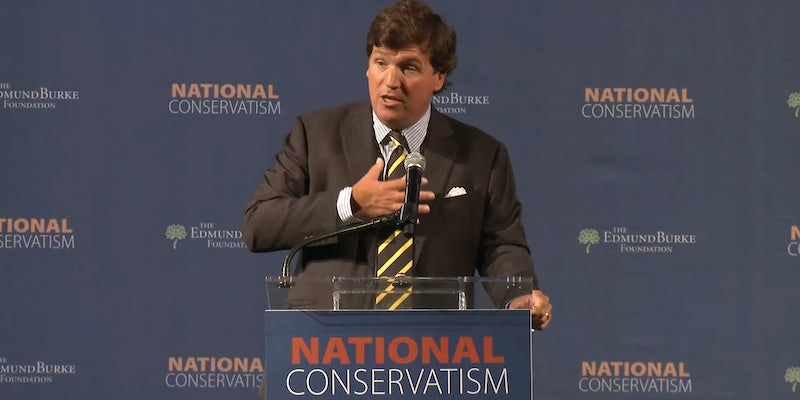 The national conservatism movement just began—does it have a future?

They are definitely sure what it isn't.

The weekend of July 19 marked the first National Conservative Conference. The conference, hosted by the newly formed right-wing Edmund Burke Foundation, hoped to legitimize conservative nationalism by both differentiating it from the fiscal, free-market fiscal conservatism of Jeb Bush and the blood and soil rhetoric of neo-Nazis who marched in Charlottesville, Virginia.

This is a thin line to walk, and after the conference, the question remains if staking out such a space is possible.

For now, such a definition remains elusive. Attendees report that a lot of time was spent on what national conservatism is not. It is not neoconservatism, neoliberalism, libertarianism, or classic liberalism. It is not a conservatism that prioritizes financial policy, military adventurism, or individual liberties.

This is a conservatism that privileges national identity. That is easy enough. The hard part is figuring out what exactly national conservatives mean when they talk about this identity.

In his opening remarks, organizer David Brog said, “We are nationalists, not white nationalists,” and added that anyone who “defines our American nation in terms of race” should leave.

Looking more closely at the words of the speakers, separating “nationalism” from “white nationalism” is easier said than done.

Law & Liberty editor Richard Reinsch, who attended the conference, spoke with the Daily Dot and defined the particulars of the movement. He said, “…national conservatism, I think, is still largely an attempt to rethink the convergence of elites around policies that seemed to devalue citizenship, borders, traditional norms and cultural values, and the distinctiveness of the American nation.”

To prioritize culture in the absence of a state religion, the culture must be defined. And that was one of the projects of the conference. Reinsch told the Daily Dot:

“I think a positive aspect of the conference is that it is an attempt to undergird the distinctiveness of the nation-state and that is the thing we belong to and are attached to via memories, habits, and traditions as Americans. If, at the end of the day, the only thing we have in common is that we have nothing in common that strikes me as disastrous. So I think the focus is on what makes American citizenship and how do we preserve the achievements of our American nation.”

The speakers tackled this idea from various angles. But, despite a multitude of speakers, the conference didn’t come up with a good answer for how this traditional, isolationist nationalism could exist outside of a fundamentally white nationalist project.

Whether explicitly or implicitly, the speakers could not speak about nationalism without speaking about assimilation. And, often the language of assimilation ends a short step from xenophobia and bigotry.

Three of the four keynote speakers at the conference, all white men, have been accused of being white nationalists in the past. The names John Bolton, Tucker Carlson, and Peter Thiel are synonymous with xenophobia for many people. Bolton is a right-wing war hawk, Carlson an anti-immigrant Fox News host, and Thiel a tech executive whose firm, Palantir, is working hand-in-hand with ICE.

If there was a star of the proceedings who didn’t already have a huge profile, it was Sen. Josh Hawley (R-Mo.). Hawley gave a speech that went viral for its articulate vision of national conservatism. In a key line, Hawley echoed Reinsch’s vision, saying, “For years the politics of both Left and Right have been informed by a political consensus that reflects the interests not of the American middle, but of a powerful upper class and their cosmopolitan priorities.”

You could read the term “cosmopolitan” as meaning economically and socially elite, but cosmopolitan areas are also known for being diverse and globally-minded.

Yes, the speech was filled with references to economic issues: he spoke to the opioid crisis, the flight of manufacturing, the lack of opportunity in rural America, and stagnant wages. But, the senator also included some telling lines that crept towards xenophobia. Early in his remarks, Hawley said, “Since the days of the city-state, the republican tradition has always viewed self-government as a project bound to a particular place, practiced by citizens loyal to that place and loyal to the way of life they share together.”

In his hour-long keynote speech, Tucker Carlson offered a similarly mixed message. The title of his talk was “Big Business Hates Your Family.”

In the speech he asserted, “The main threat to your ability to live your life as you choose does not come from the government anymore, but from the private sector.”

This presents a sharp contrast to the neoconservative philosophy that has dominated the last half-century by extolling the virtues of the private sector.

Like Hawley, Carlson cut his economic message with nods to bigotry. He attacked Rep. Ilhan Omar (D-Minn.) as “living proof that the way we practice immigration has become dangerous to this country.”

Other speakers veered even into more explicitly xenophobic territory.

National Review’s Rich Lowry said, “We should insist on the assimilation of immigrants into a common culture.”

Amy Wax, a right-wing professor who was disciplined by the University of Pennsylvania for making racist statements in an article, was even blunter.

She said, “Europe and the first world, to which the United States belongs, remain mostly white for now, and the third world, although mixed, contains a lot of nonwhite people. In effect, this means taking the position that the country will be better off with more whites and fewer nonwhites.”

While these comments made some attendees uneasy, some major conference figures came to her defense. Conference organizer Yoram Hazony supported Wax.

It’s hard to see this line as far off from the infamous white supremacist chant, “You will not replace us.”

Sometimes white supremacists chant the line as “Jews will not replace us.”

There is also a similarity between this rhetoric and the “Great Replacement” language that has come out of neo-Nazi and alt-right circles. Recently, the El Paso shooter used this framing of immigration in his manifesto.

Are strong, traditional families, communities, and place of worship the key to a better country? Those on the left would say no, but that is a tough question to answer. Even among conservatives, there is disagreement about what is “traditional” and what is American “culture.”

The more pressing question for this movement is whether it is possible to have national conservatism without racism and xenophobia. If the project is aimed at emphasizing traditional American ideas of family, community, and religion, in the minds of many of the conference speakers, those ideals clearly look very white.

Some attendees left the conference feeling optimistic about national conservatism. Michael Barone of the Washington Examiner and the American Enterprise Institute told the Daily Dot, “I think the future of national conservatism is pretty robust, partly because the label places in some historical perspective the policies and stances of President Trump.”

From the outside looking in, it is hard to agree with this optimism. Beyond the fact that the message is problematic, it is hard to imagine it resulting in a coalition larger than Trump’s, which lost the popular vote.

Not only does this brand of nationalism exclude minorities, it excludes their “cosmopolitan” sympathizers and conservatives who care more about low taxes than high levels of cultural heritage.

Like the MAGA movement, national conservatism seems to live in an imaginary America. In the actual America, the vast majority of citizens live in cities, or cosmopolitan areas. It is hard to imagine many allies for the movement who weren’t in attendance at the conference.

This is the conundrum of national conservatism: they want to entrench a culture that doesn’t exist. Francis Buckley, a conservative thinker skeptical of the conference, summed up the problem succinctly in an email to The Daily Dot.