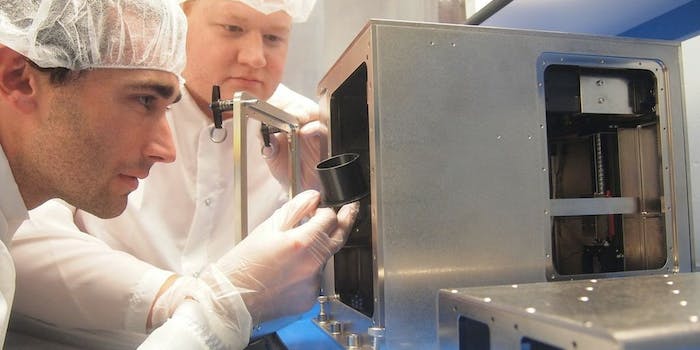 NASA is sending the International Space Station a 3D printer

It’s not a Star Trek Replicator, but it’s close.

A microwave-sized box with sleek metal sides, nifty blue lights, and an extruder that squeezes out heated plastic is finally ready to achieve its dream (or rather, the dream of the team that built it): This box will be the first 3D printer in space.

NASA is all set to launch Made In Space’s 3D printer. In April, the printer passed all the safety testing at NASA’s Marshall Space Flight Center. (The news release doesn’t specify if the parts passed under the nose of NASA’s chief sniffer, but it is likely that it has been checked for smell safety.) The printer will launch on Sept. 19 aboard SpaceX’s unmanned Dragon cargo capsule, writes Mike Wall of Space.com.

3D printing involves extruding melted plastic onto a platform and layer-by-layer sculpting the final shape. The mission plans to demonstrate that the process works in the near-zero gravity of the International Space Station (ISS) and identify any kinks.

All the hype around 3D printers is based on the fact that they can make customized parts on demand. 3D printing in space is an ideal use of this technology. “I remember when the tip broke off a tool during a mission,” NASA astronaut T.J. Creamer said in the news release. Creamer lived and worked on ISS from December 2009 to June 2010. “I had to wait for the next shuttle to come up to bring me a new one. Now, rather than wait for a resupply ship to bring me a new tool, in the future, I could just print it.”

That printing of small parts is just the first step, according to Made In Space:

Today, 3D printing in space can enable the building of parts on the International Space Station—form science hardware to emergency fixes. In the future, space-based additive manufacturing will enable a variety of game-changing capabilities—from large 1 km+ megastructures that could not be launched to building entire spacecraft from asteroid materials.

Their plan doesn’t mention printing food… but perhaps that’s because another group is already working on printing pizza in space. When 3D printing technology can produce any food on demand, I’ll have tea, Earl Grey, hot, please.

H/T Space.com | Photo via Made In Space/NASA