Muse just measured what SXSW is doing to my brain

Hint: It's not great.

A very important part of SXSW is the stumbling upon of things—which is how I got my brainwaves read yesterday while wandering Sixth Street. With time between meetings and no real desire to fight my way into a lounge, I started to just ask where the party was at. (Turns out, that’s how you ask people if they have drugs. Who knew.)

This is how you find a lot of things at SXSW. Inside a small mixer were a handful of startups and taco trucks and over-priced beer. And then there was Muse, an Indiegogo project I’d actually heard about.

Muse is a headband with seven built-in sensors that measure your brain waves and and help you make use of that activity. It uses the same EEG technology that doctors need to assess your brain. You can use training sessions via the app to exercise your mind and help you manage your stress and learn how to cope with an overactive, over-demanding world.

Traditionally, SXSW has been about the ethereal technology companies; the ones that create virtual worlds that we can’t touch and feel IRL. Your Twitters, Foursquares, and Instagrams. But this year wearable technology and devices that deliver analytics about you are representing in a big way. They’re also doing creative things at events: Muse technology was used at the 2010 Vancouver Olympics to let those demoing it control the lights of downtown, and a DJ will don it at SXSW and let the crowd see what his brain is doing via large projections splashed on the walls around the venue.

And here at this midday mixer, anyone had the chance to wear the headband and see it analyze the state of your very likely overwhelmed and abused brain (SXSW is a shit show, people; I cannot express this enough). 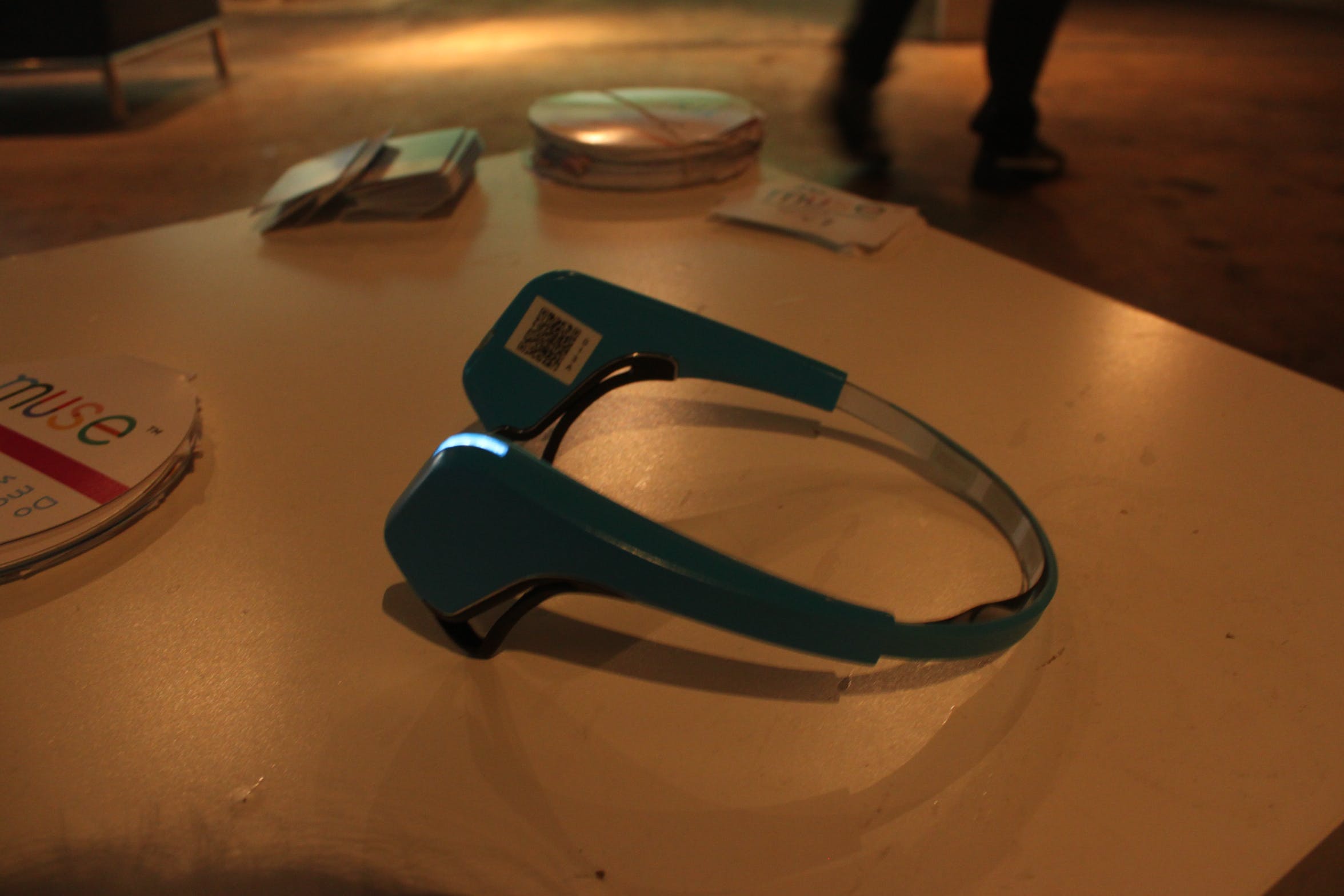 I left the chaos and constant hum of the small party and went into a dark, empty bar next to it, where the demos were being held. A girl was currently sitting quietly, and every wall displayed the reactions her brain was having to her surroundings. People were quietly milling around, and every time a noise disturbed her, you could see that she—er, her brain—was trying to calm itself down again.

Then it was my turn. I fitted the band to my head, sat back, and let the app talk me through my stress. 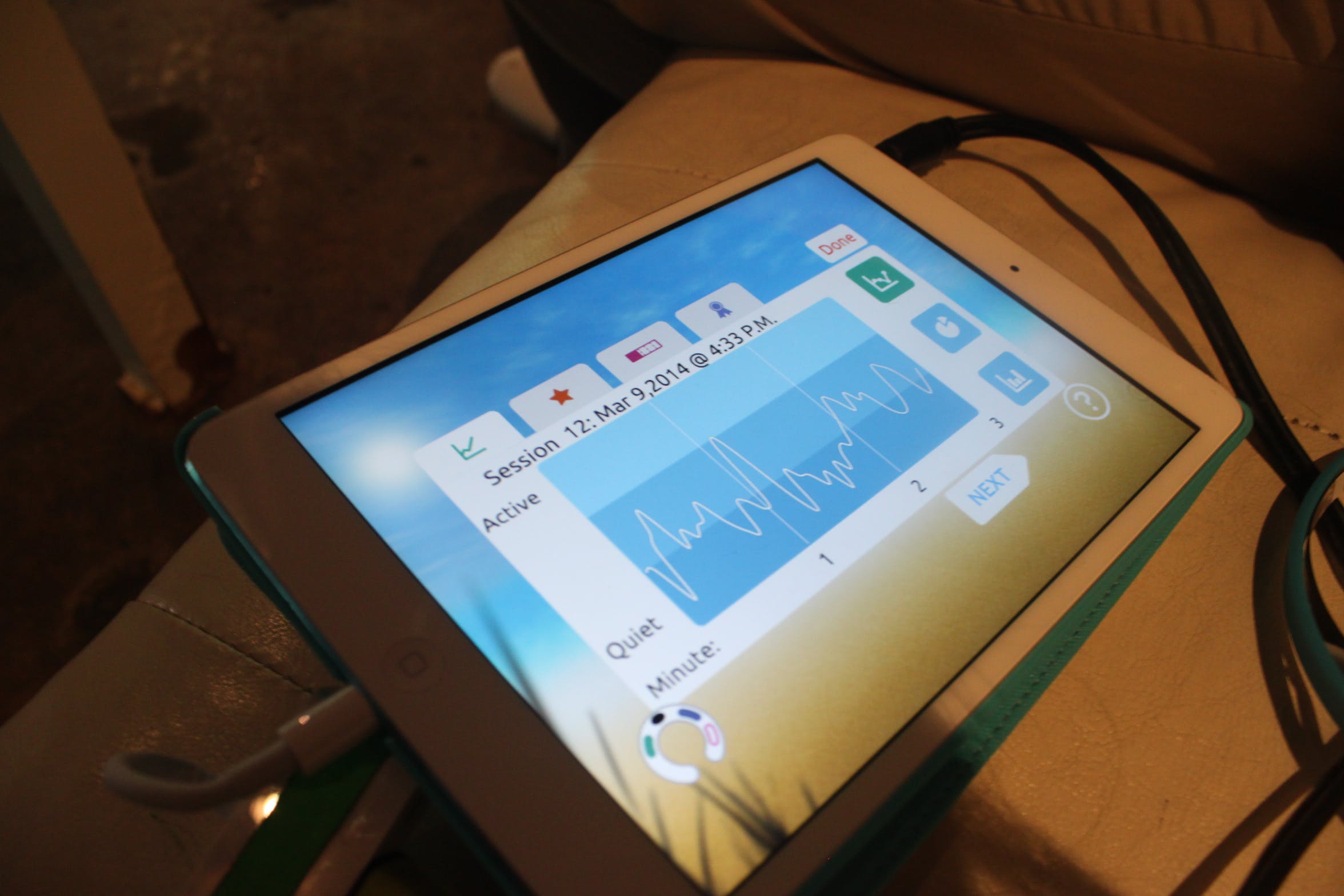 And let me tell you, there is stress. Just the simple stressors: being away from home for a week, not getting my usual run in, meetings, meetings, meetings, parties, parties, parties, people. People everywhere. So many people. None of these things are going to make me tear my hair out or send me into treatment (I don’t know, maybe next year I’ll reach my limit and need SXSW recovery therapy), but I can feel that my body and brain are racing to acclimate to the overstimulation here.

My Muse report showed as much. Even in the dark and relative quiet of the abandoned bar, I had to try to quiet my mind and center myself. The spikes in my brain activity showed that for but a small period I time I was able to slow things down, to ease my stress. 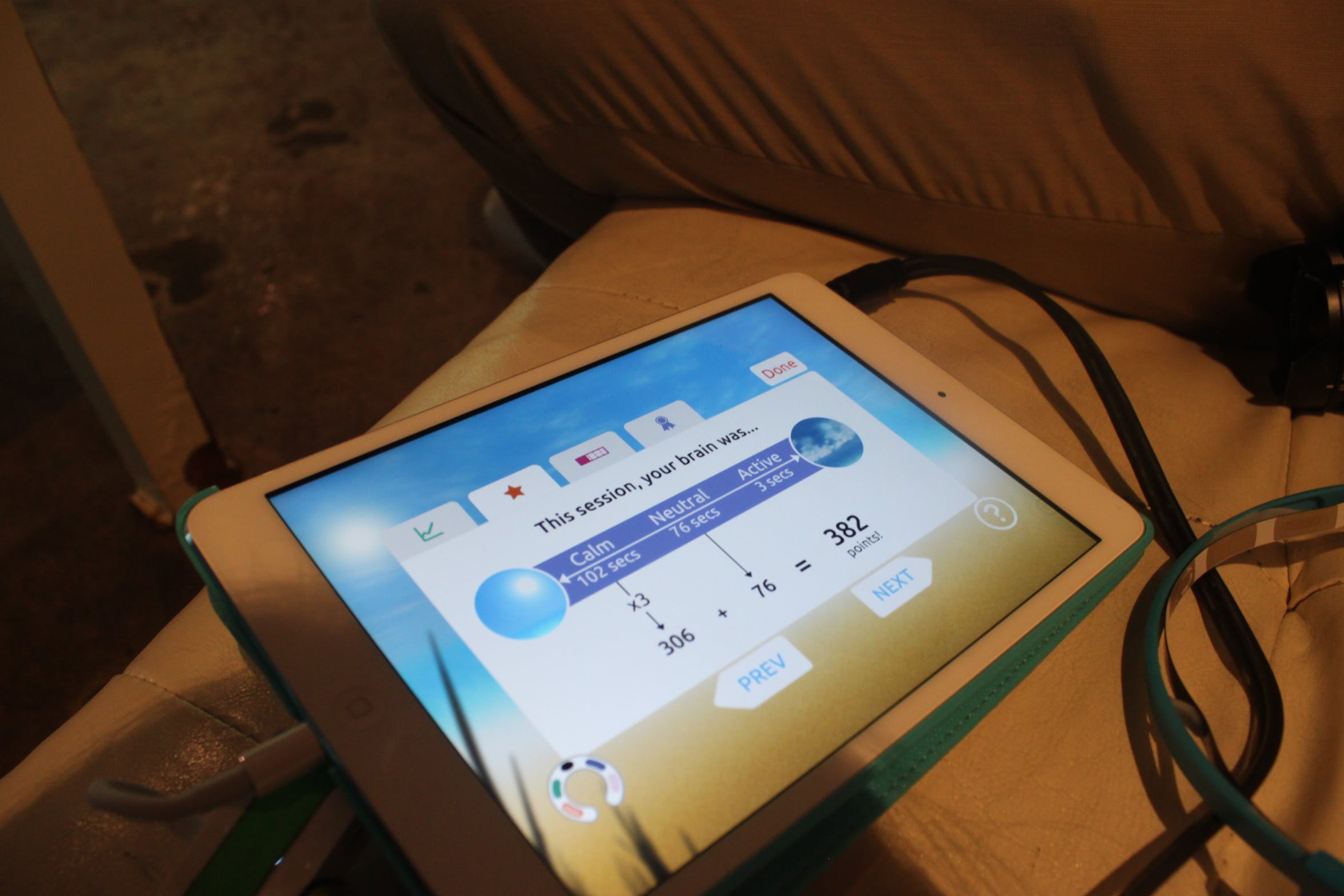 Muse is available for pre-order now (the base price is $299), and units will start shipping this summer. Speaking with some of the team, including investor John Frankel from ff Venture Capital, they emphasize that while it’s part of the wearable technology movement, it’s measuring things that a lot of these other devices—Fitbit, the Fuelband, Google Glass—don’t. (Yet.) Muse looks at your brain, not just your pulse, or your location and movements.

Muse is interested in your mind, not just your body. Though admittedly, both my brain and body are in need of major recuperation from SXSW.